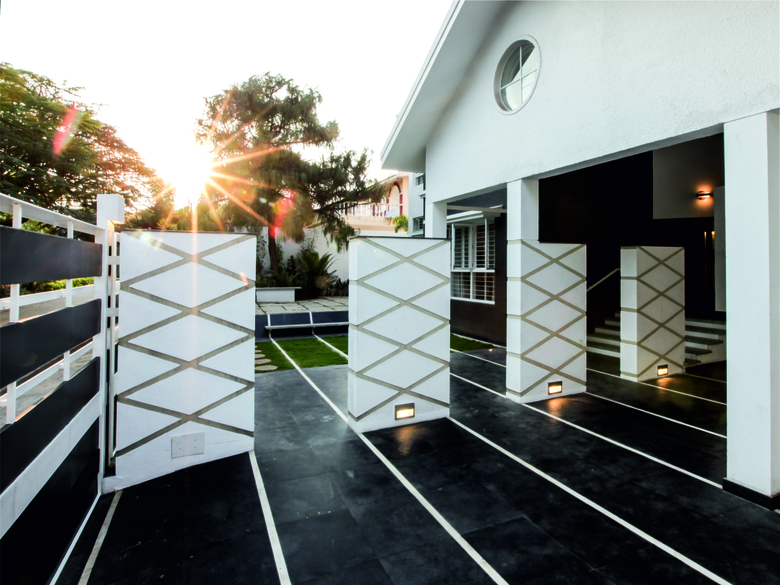 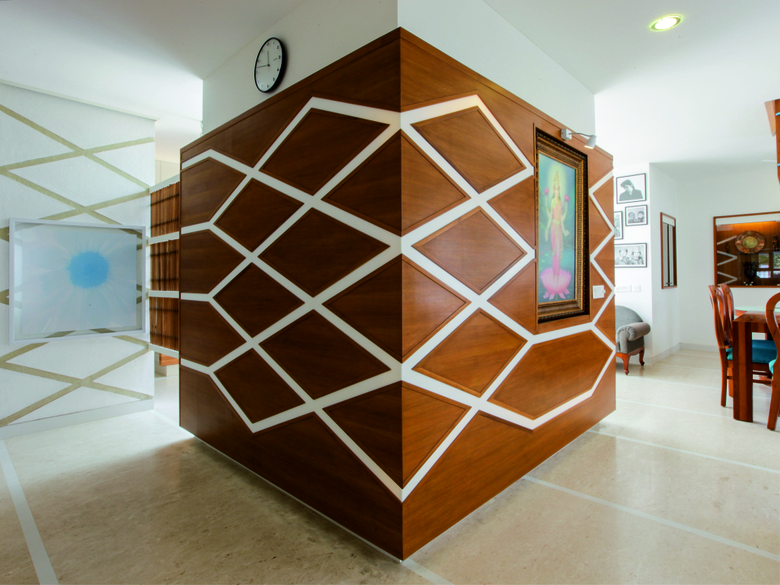 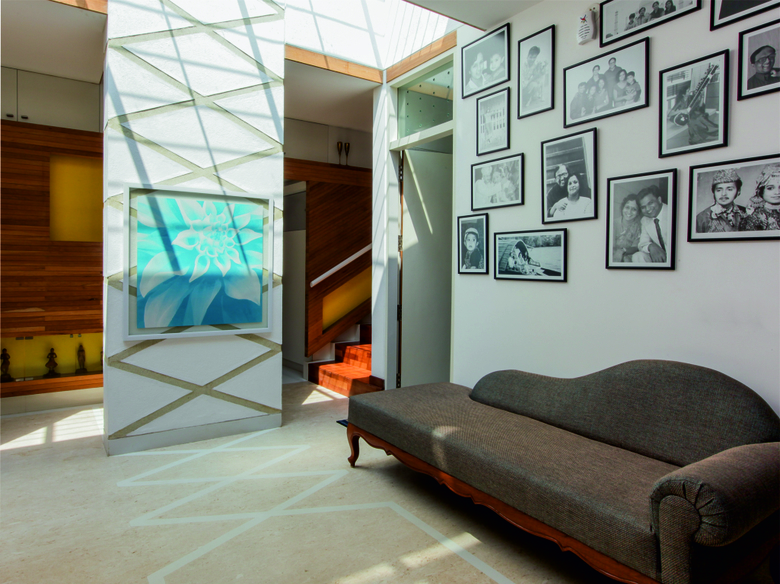 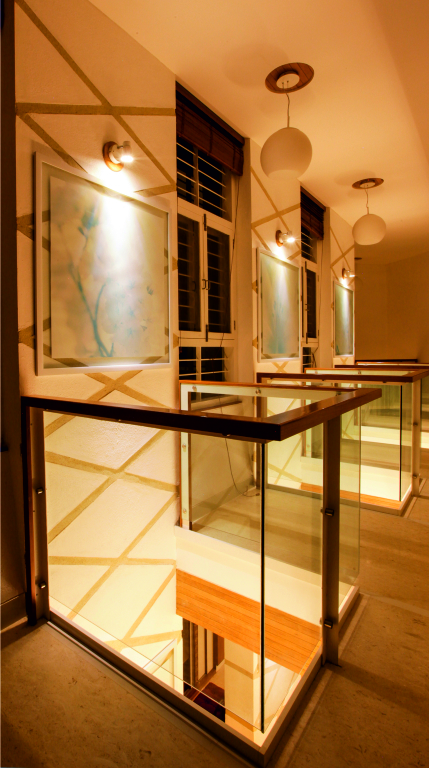 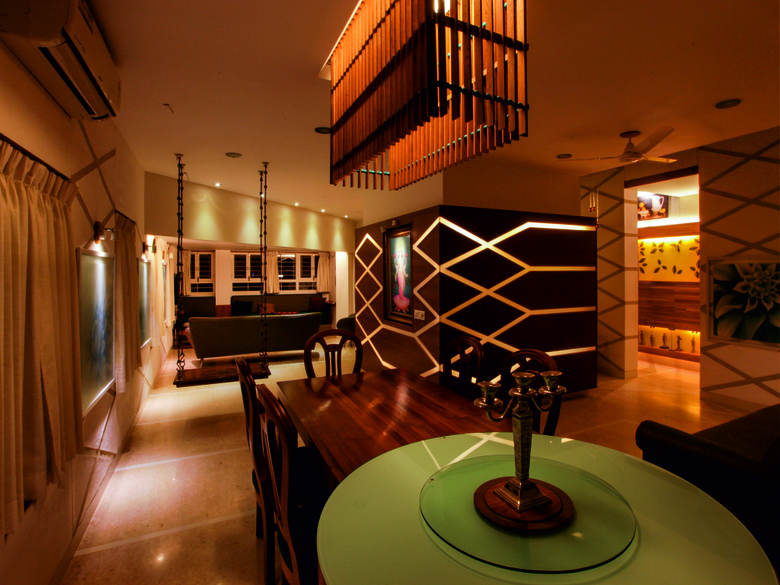 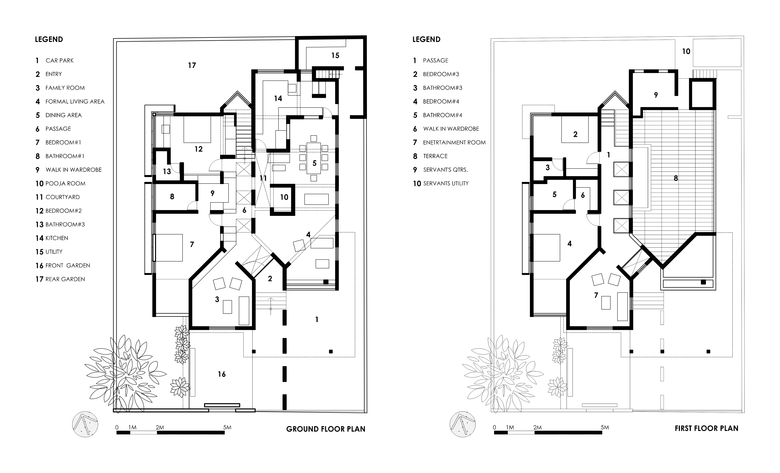 Originally assigned to do a minor restoration of a 90’s house in Bangalore, the Fragment House developed into a layered brief from the clients over a duration of two years. The elderly couple wanted to ‘update’ their house through the various layers of brief, these layers were to adjust with each other and yet formed something comprehensively new.

THE UPDA(TION):
The existing building with its haphazard walls and division of spaces, was changed into a simple layout with a clean plan. Unnecessary areas were removed and utilized for storage. Any inconsistencies in spatial proportions were removed. The wide passages were made more proportionate to their length and the small bedrooms spilled onto them.

The external façade was not to be touched. It’s daunting presence with large roofs and volumes were merely melted or accentuated as the case maybe to develop character for the front of the house. The upstairs, which the couple barely used was also updated, with new flooring and finishes.

The garden was removed and realigned with the entry, to emphasize its affinity to the entry more than the car-park area as it previously did.

THE NEW:
The merge of all these layers of work gave birth to the ‘new’. This was the ‘new’ sequence derived from the upda(tion) process and breaking of walls left unbroken. This sequence along with the changed volumes give a new meaning to the house. The ‘weave’ as we conceptually called is a pattern which runs through the house along with the sequential walls and on them to define the parametric and cartesian changes of the structure and its woven manifestation.

Where the sequential walls ran through both the floors, they were allowed to form continuously, the cut out was made for them to do so. These allowed sunlight to come into the house in the same sequence, and similarly the breeze ventilates the house.

The courtyard came in as an elemental hinge of public and private spaces, and to light up the underbelly of the house as the sequential walls towered vertically. The courtyard though majestic in its conception provides a muted and calm space, which nestles the pooja area and the meditation space of the house.

The pooja room itself is the most exuberant of the new, in the fragment house. It sits in the middle of a large space, as its back faces the public spaces of the house, and the front towards the courtyard. It becomes the lamp, the sculpture in the round and the movement hinge for the common spaces on three sides of it.

The ‘background wall’ takes the edge of the bedroom as they expand into the passage. It becomes the background to the house for visitors and the leading wall for the residents, as it moves along the passage into the staircase with its dynamic form and yet calm disposition. The background wall is barely seen in its entirety. It is usually seen in fragments of compositions and elements.

The ‘Fragment House’, after its upda(tion) of function and experience, is a house of elements old and new, merged in a new suspension of experience. Every step created a new dynamic between the elements and no global experience exists to sum it up. It’s variation of experiences amplifies with variations of light and shadow, to create additional facets in its experience.