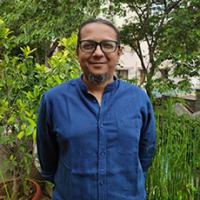 Gaurav Roy Choudhury completed his graduation (2002) and post-graduate fellowship (2004) from KRVIA, Mumbai. He then joined Mathew and Ghosh Architects in Bangalore, and worked with them form 2003-2007. He was the project architect for the Freedom Park Project done by MGA, which received a Commendation as the Best Urban Project for the Architectural Review Cityscape Awards. During his tenure at MGA he was the core-designer for the competition entry for the Bhopal Gas Tragedy Memorial Competition, which would later be awarded the Chicago Athenaeum International Architecture Award.

Gaurav Roy Choudhury Architects (GRCA) was setup in 2007 by the architect and its main aim has always been to articulate the various movements that assimilate context, taking the project brief from the "said“ to the "unsaid".

In 2009 the Ghose Residence was nominated for the 2010 Brick Awards as an Indian entry. Subsequently Gaurav Roy Choudhury was selected as the Best Young Architect Under 35 – India in an event showcased in the Venice Biennale, 2010.

GRCA believes in taking on a limited number of projects to facilitate more customized and unique processes, be it with design or with client needs. Its belief of ‘less is more' is congruent with the kind of practice it is today.