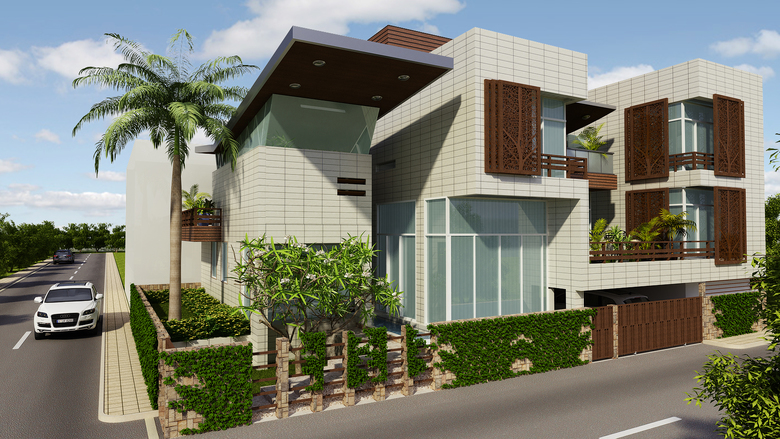 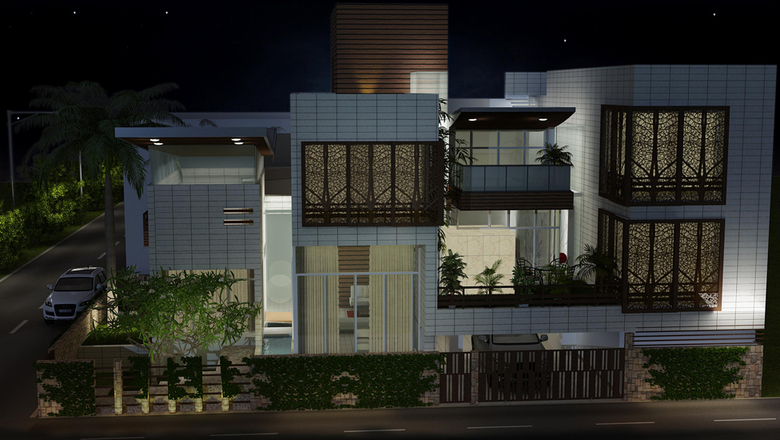 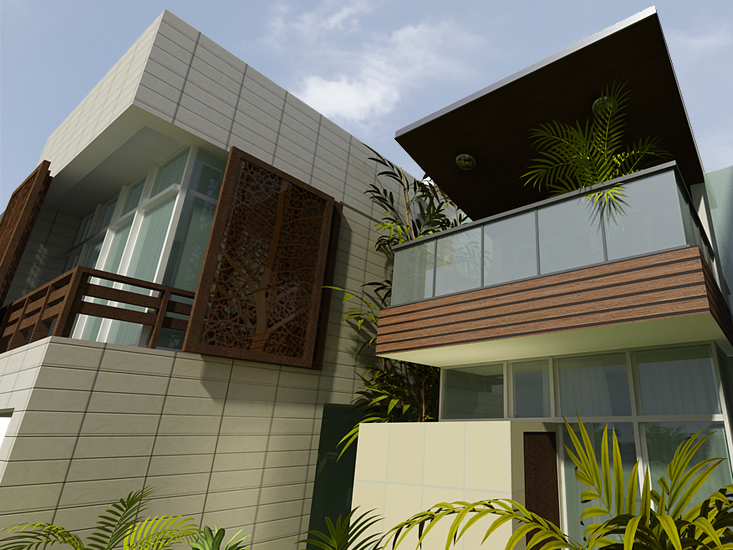 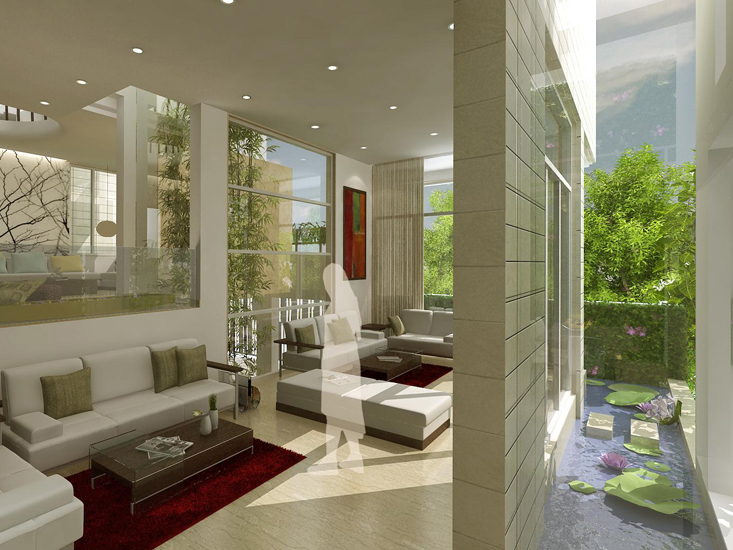 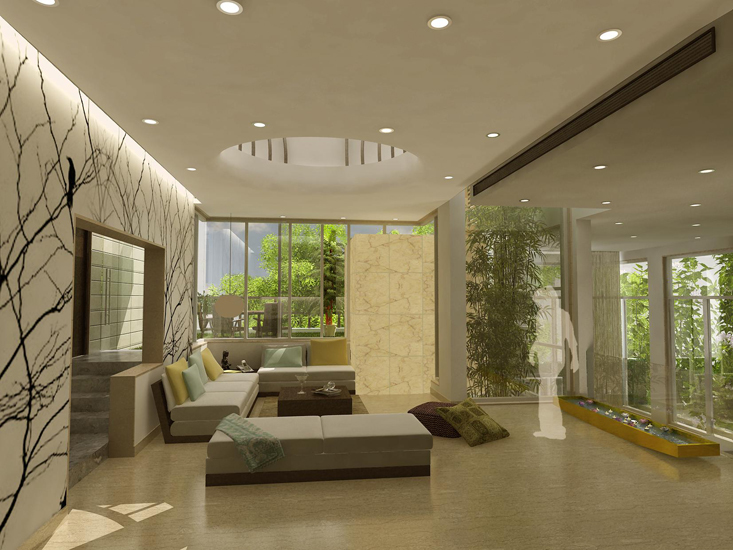 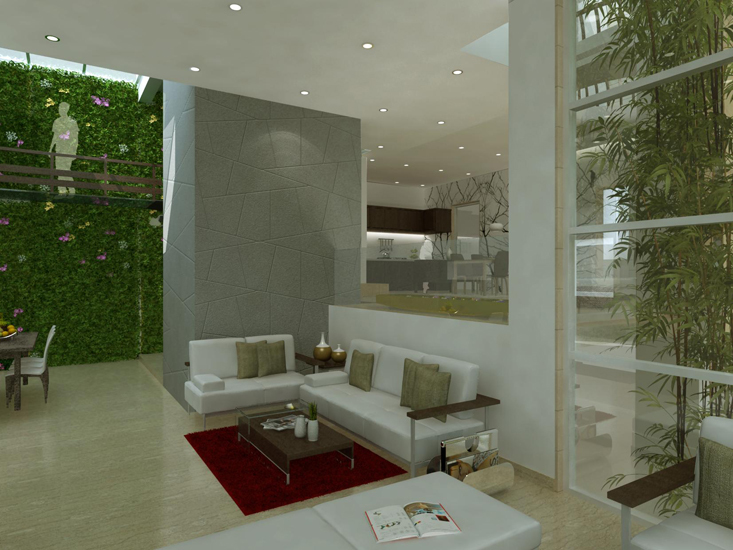 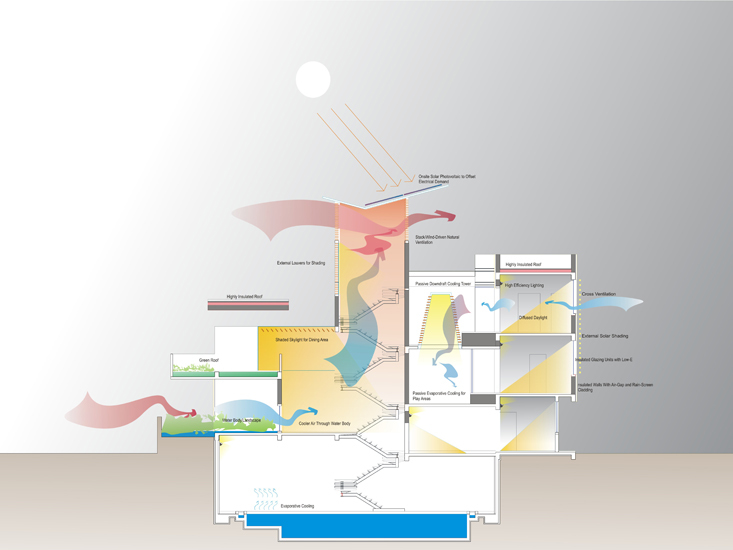 The project envisages a house that lives, breathes, consumes, produces and converses, rather than just being an inert block fortified to mitigate the assault of nature. The Metabolic house is conceived as a residence of manipulated volumes capable of complex environmental process and meaningful spatial interactions. The design interrogates the existing mono block introverted, courtyard residential typology. The locational advantage of being a corner plot is exploited to create an extroverted breathing architecture.

The aim of the project is to have a minimum energy footprint using both active and passive systems. Various studies such as stereographic diagramming to analyze light quality and shading required, insulation studies to analyze average hourly radiation received were carried out to ensure comfortable living spaces which have minimum environmental impact. Roof space has been dedicated to mount solar panels for electrical power generation, enough to sustain the lighting needs of the regular night time usage and water heating. An innovative air-cooled system for conditioning has been worked out in association with specialists that reduces the electrical load by 40 % and at the same time ensures cohesive usage of the spaces. The chillers that run only at night time, at lower atmospheric temperatures, reduces the electrical energy consumption needed to chill the same amount of water during the day. The chilled water is stored for daytime usage. Other systems include use of LEDs, grey water reuse, rain water harvesting and insulation. The exposed vertical wall surface are clad with a special ceramic cladding tile which forms a homogeneous rain screen and at the same tile is air ventilated, thus helping in keeping the temperature comfortable inside.

The passive systems include breather buffers that help to maintain fresh air supply in the interiors along with the down draft cooling tower augmenting the active air-cooling system by ensuring an incoming supply of fresh air. A hybrid system of evaporative cooling and air conditioning is thus created. The daylight filters into the interiors through the open façade and the breathers in between the spaces thus taking care of the day time light requirements while the harsh light quality during day time is modulated through screens and other sunshades inspired by traditional Rajasthani architecture, thus creating comfortable and well-lit open habitable spaces.

The entrance is on the shorter side so that the interiors can converse with the exterior through a number of differentiated spatial articulations that act as buffers strung along the longer side. These interstitial spaces not only mediate between the internal and the external but also between adjacent spaces within the house. The strategic introduction of breathers into the volumetric of the house allow for the creation of micro-environments that help the passive control of the internal climate. Further, they replace walls as the spatial differentiators contributing to greater visual connectivity and the perceived expansiveness of the internal spaces. The inter-spatial connections through the light wells, voids, vertical greens, cutouts and buffer spaces create the possibility of fluid usage by the joint family. The wall-free interior spaces are multileveled to create a sense of dynamic continuity through visual connections. Amalgamation of different scales of spaces provide for intimate spaces while they can still be opened up and enlarged. The house is a treasury of experiences, encasing a different experience at every corner, resulting from the fluid nature of volumes and spaces, both vertically and horizontally.

The idea is to think of a house more than just a dead object. The spaces are juxtaposed over each other and the whole design is grounded on their spatial relationships and experiences. The wall-free interior spaces are multileveled to create a sense of dynamic continuity through visual connections. The design ideas and concepts are very practical and used could be replicated in most parts of the world without much technical knowledge.

The architect and the owner/client of the building are strictly following ethical principles and transparency in design. The clients, along with the consultants, are deeply involved into the design development process. Strict worker safety measures are being taken on-site and till date no accident has been reported. Most of the labor employed is of local origin, thus it provides them employment opportunities.

Traditional passive systems backed with modern active systems minimize the energy footprint of the building. There is a combination of traditional Indian passive and modern active systems used for minimizing the energy footprint. The light system uses an open facade for maximum day lighting and traditional screens or ‘the jaalis’ for shading and harvests solar energy for night lighting. The water system uses rain water collection and grey water treatment to supplement the fresh water supply and solar energy for water heating. The HVAC system is augmented by fresh air.

The uses of hybrid (active and passive) systems have brought down electricity and air conditioning requirements. This brings down the running costs of the house and promises a quick payback period.

The visuals of the house use a very clean vocabulary. The aesthetic impact of the house is governed by the spatial relationships and experiences that exists both inside and outside the house. The overall mass has been divided into layers which beautifully flow into each other through slits that make the house stand out, creating its own style. The regular and repeating volumes are playfully broken by elements such as the screen panels, metal roof, etc.

Other Projects by Anagram Architects