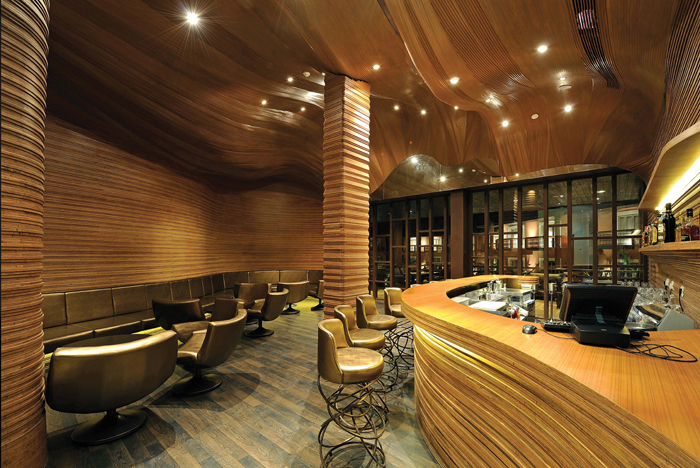 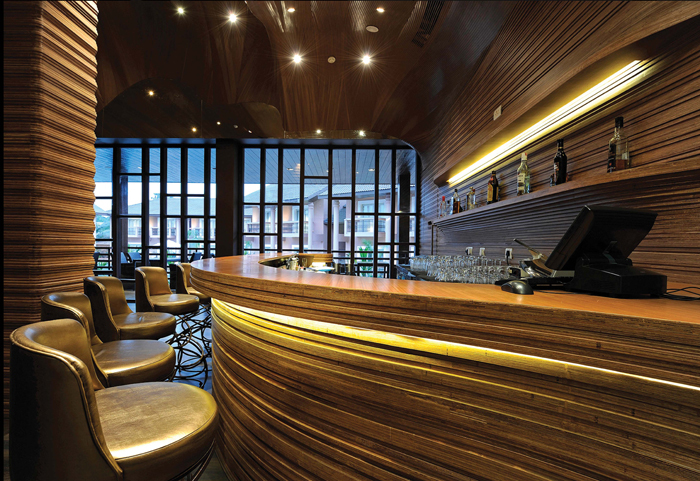 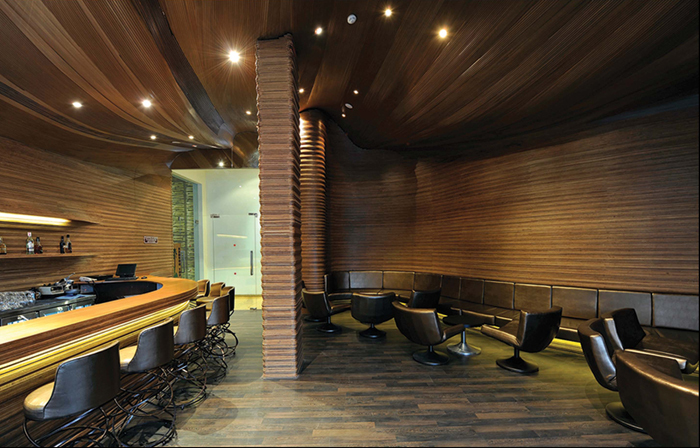 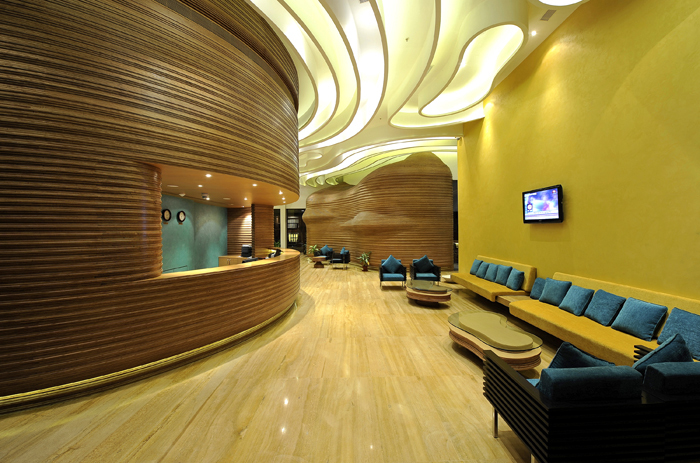 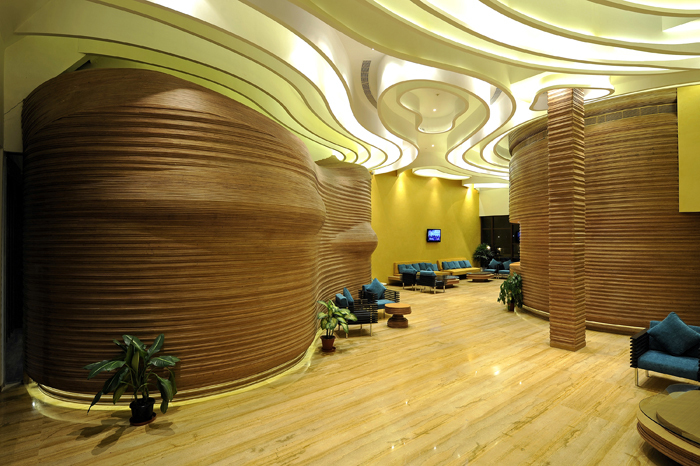 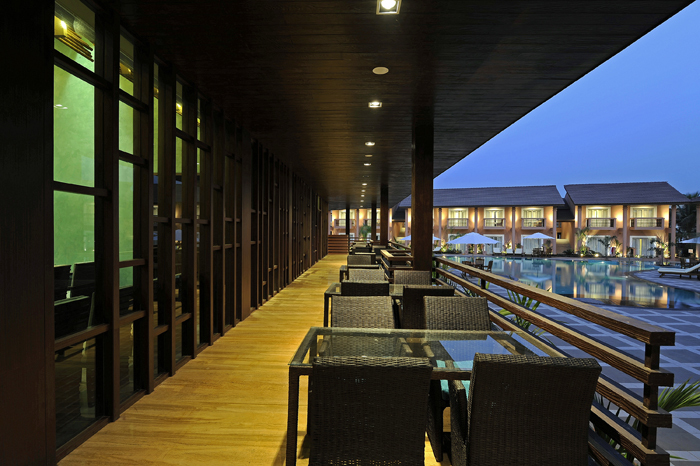 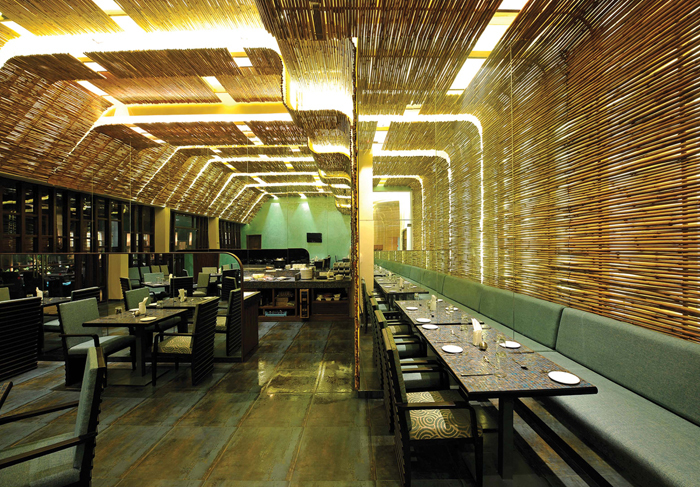 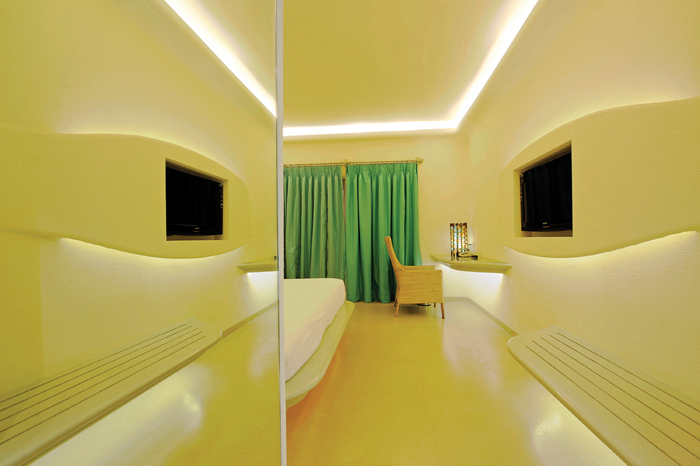 A series of fluid spaces each with their own identity created by a judicious mix of forms, materials and lighting, transform an existing 50 room staid hotel into a boutique resort with every space creating a different experience.

The existing rectilinear space allocation in the main building housing the hotel’s public spaces was completely eradicated and substituted by free flowing partitions that visually opened up all the spaces allowing them to be perceived as larger in all three dimensions. The earlier low height ceilings were removed to allow the entire available height within the pitched roof to be discernible and experienced as a large volume.

Fluidly moving partitions in stacked plywood create a reception space and envelope a bar space at diagonally opposite ends allowing the open lobby area to meander between them before eventually opening out to the large open landscaped area outside.

Suspended curvilinear gypsum panels at varying heights over the lobby space accentuate the fluidity of the space while creating a sculptural effect.

The small 35 seater bar is created in stacked plywood sheets that merge the walls with the ceiling creating an envelope that flows like an undulating fabric over the entire space creating a cavernous space with a distinct identity.

A restaurant towards one end of the lobby is created from thin bamboo screens that undulate across the varying heights unifying the space, making it appear larger and creating a different experience!

Thus, within a few feet of each other, the three main public spaces including the lobby, the bar and the restaurant, each offer a different experience while being linked by the thread of fluidity that is inherent in each one’s design.

A large linear outdoor verandah is added to the existing hotel to provide an outdoor dining space, which is visually connected to the open landscaped area, overlooking a large lagoon pool that was added to the hotel as a part of the renovation.

4 small 2 level buildings house the 50 rooms of this hotel overlooking the lagoon pool. These rooms being very small in physical size, only 280 sq.ft., compared to most hotels in the area with rooms of 300 to 400sq.ft., were also enveloped in fluid elements to make them appear larger. A curved panel merging into the wall houses the T.V. with the furniture too merging with the walls, all unified by a simple color to allow the space within to be perceived as larger.

Oceanique with its complete transformation becomes a series of experiences with each of its spaces being perceived in a unique manner.