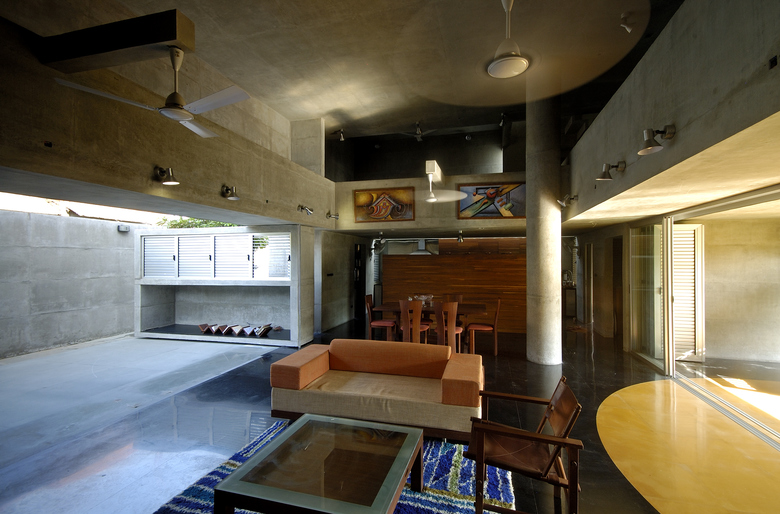 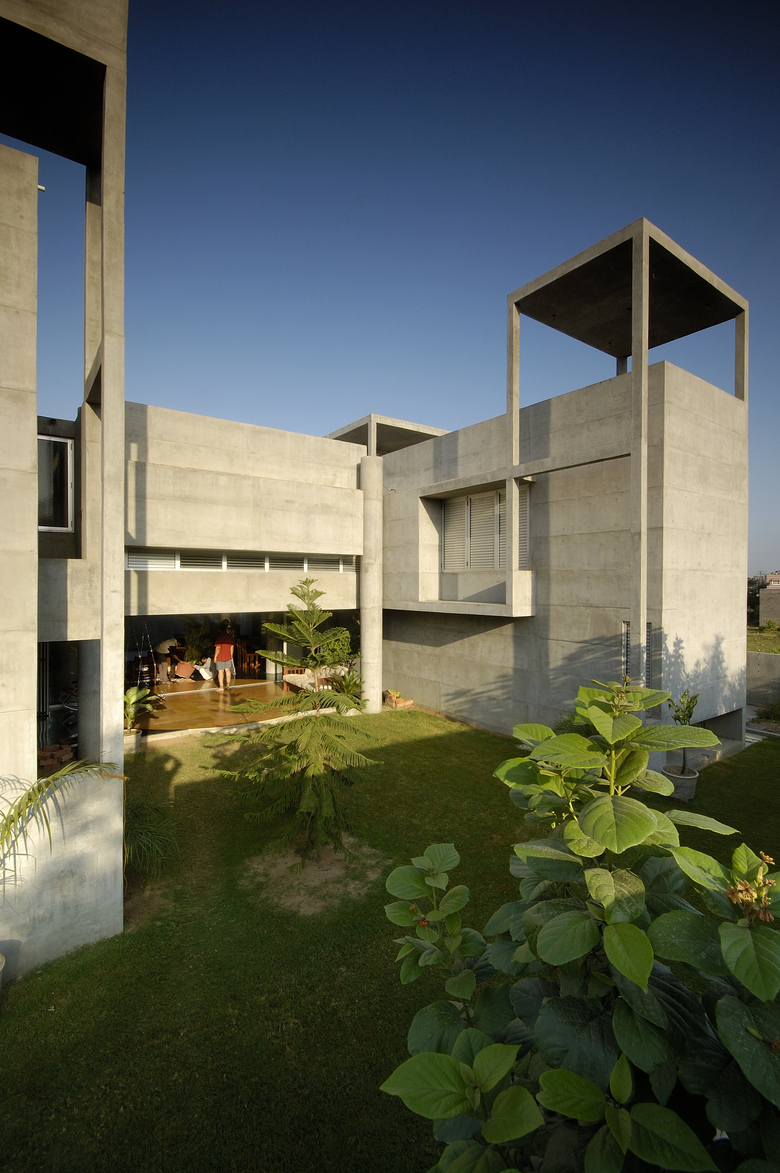 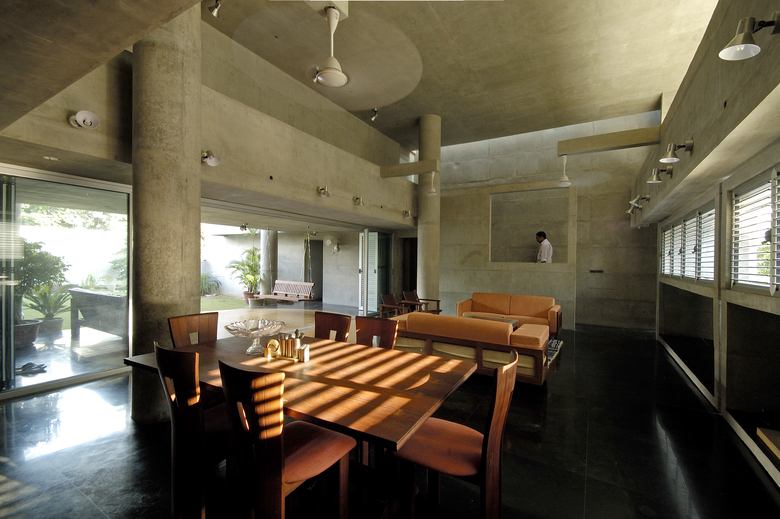 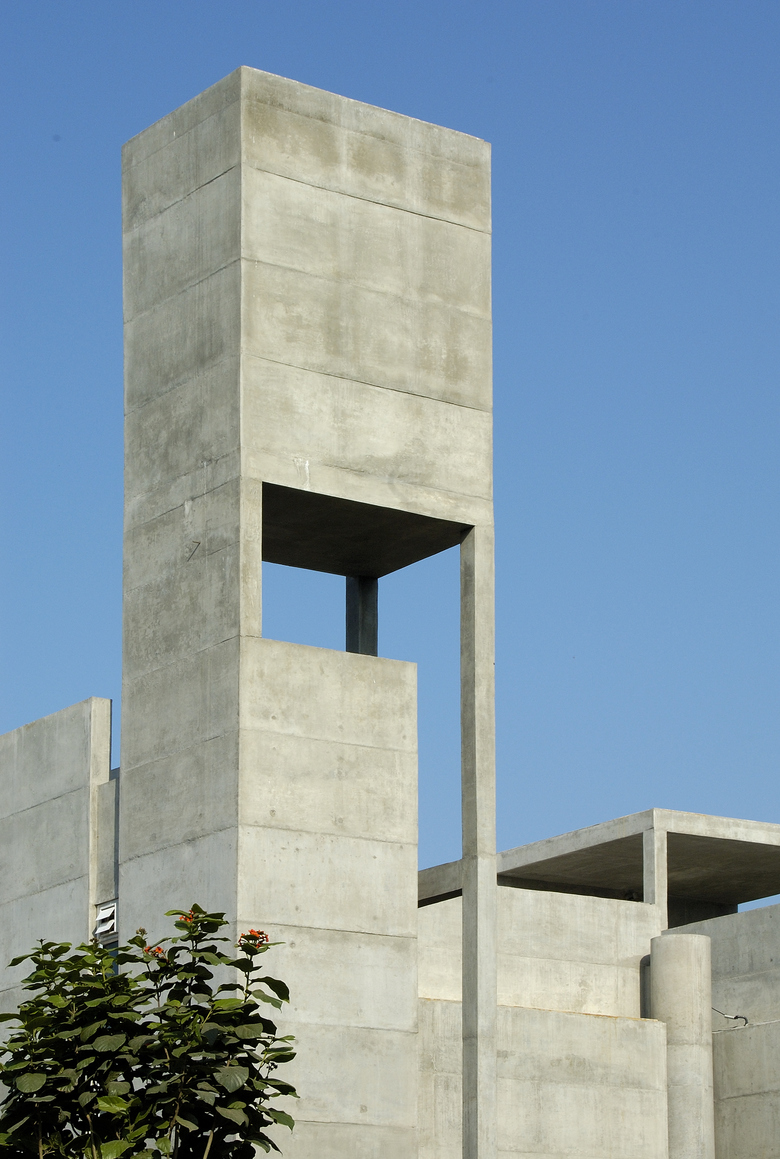 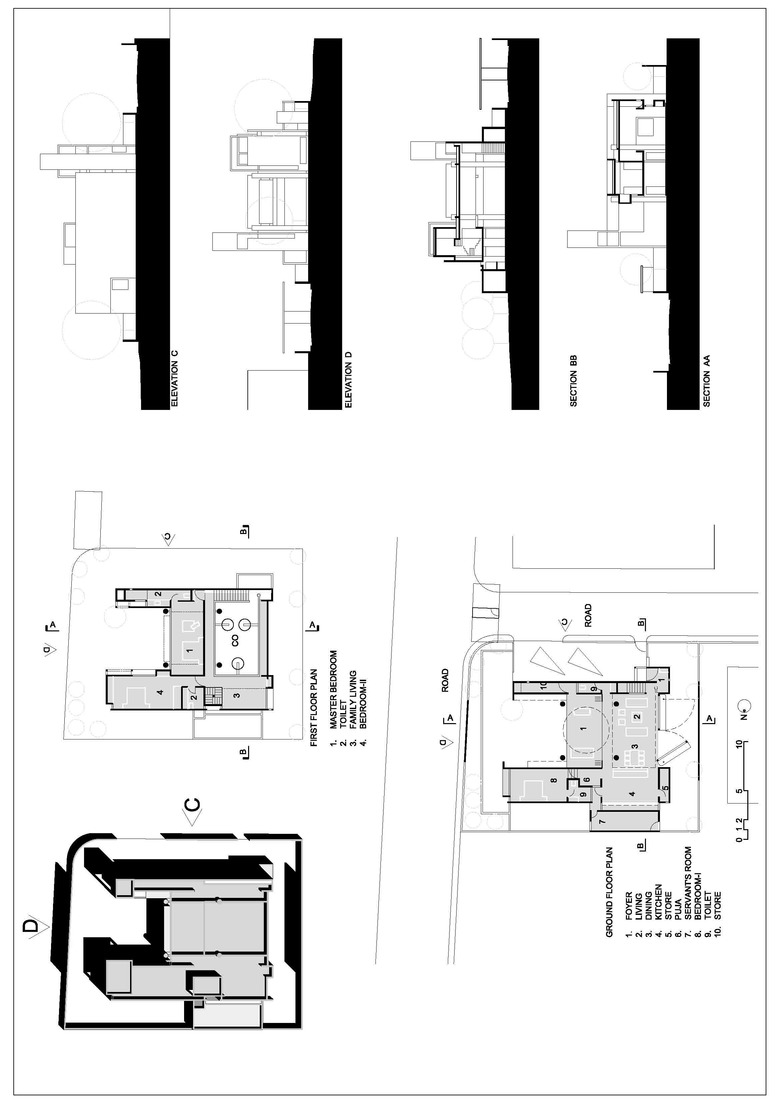 Located in fast growing suburbs of Ahmedabad, a prosperous city in the state of Gujarat in the west of India, the house is designed for a family consisting of a socializing couple, their teenage son and frequently visiting parents and relatives.

In open plot developments of 1000 sq.mts or less, the building byelaws demand a minimum distance of 3mts left as margins all around and 4.5mts on sides abutting the road. (Photo 5)As a natural reaction to maximize ground cover more and more houses tend to open out into these narrow margins and as a result right into each other. Outcome of this optimization is that windows remain perpetually closed and curtains drawn. Coupled with the new found ‘aspiration’ of air-conditioned homes with artificial lights on, arising out of the engulfing ‘mall and multiplex’ fall out, the situation becomes a perfect paradox:- ‘Closed houses on Open plots’.(Photo7) The attempt in this design is to address this very paradox and as a starting point, on one hand it looks at the inward looking traditional ‘Pol’ houses of Ahmedabad which are deep rooted in the memories of migrant owners of this house while on the other hand it looks for inspiration in the post- independence ‘Open Plot Dwelling’ best exemplified by Le-Corbusier’s ‘Shodan House’, also in Ahmedabad. Incidentally, the only house in all concrete after Shodan, after a gap of 50 years.

Two blocks, one each of bedrooms on the north and services towards the south, are placed longitudinally on the site creating a central void which is enclosed by raised compound walls on the shorter sides. While the house shuns the road and the anonymous neighborhood it draws in the nature; breeze, green, rain, sun and sky deep into and through its varying degrees of openness.(Photo 2)

The rear walls of the house, cast in concrete and replete with windows and cabinets, pivot out mechanically claiming the rear margin and turning it into a room with sky as the roof. This, coupled with sliding doors at the verandah in the middle of the house make the entire length of the house from front compound wall to rear compound wall a unified private living domain.(Photo 11) This space is then graded with open, enclosed and covered sequences of hierarchy. Notional center of the house, defined by four exaggerated round columns and round natural yellow stone flooring signify a living which is out in the open and tries to re-establish the lost connection to nature. (Photo10)

In the aftermath of devastating earthquake of 2000, the structure of the dwelling became an overriding concern making concrete a rational choice which combines the enclosing surface and structural surfaces into one. The use of concrete as material, which is strong, gives sizes which are small and thereby the resultant structure is clear, delicate and extremely light. Moreover as against 11-12% of plinth area used by the usual brick and concrete frame construction the rc used only 5% of plinth area resulting in a saving of 18-20sq.mts of both, precious land and built up area which would have otherwise been lost in constructed dead space in this 450mt dwelling. These savings are over and above the constructed cost of Rs 1,080 a sq.mt which is same as that of typical masonry structure with plastered walls.

Another direct fallout of thin building elements is in the fine scales achieved which make the house intimate and human.(Photo 8) Two sets of heights are used, 2.2mts for areas like passages, verandah, kitchen and toilets whereas 2.8mts for rooms with ceiling fans. Using them in combinations the other heights derived are 4.6 for double height living room and only 6mts for overall height of thes two storey dwelling. Against the typical height of 7-8mts for two storey buildings all around this house is miniscule. This is further aided by the fact that all wall columns and slabs are 150mm thick which would have been 250mm for masonry structures. The columns, walls, beams thus appear to be woven into an intricate lattice which comes alive with the strong sun falling on it.The epitome of this filigree is a 50mm thick stair entirely cantilevered on its risers and composed as a square helix.

The other materials used are natural black stone for flooring and Aluminium for doors and windows. The stone is cool for the barefoot use and all furniture is in natural teakwood to provide the requisite warmth. The material theme is continued in the bedrooms and toilets as well. These are the only two natural materials used in otherwise industrially produced material ambience.