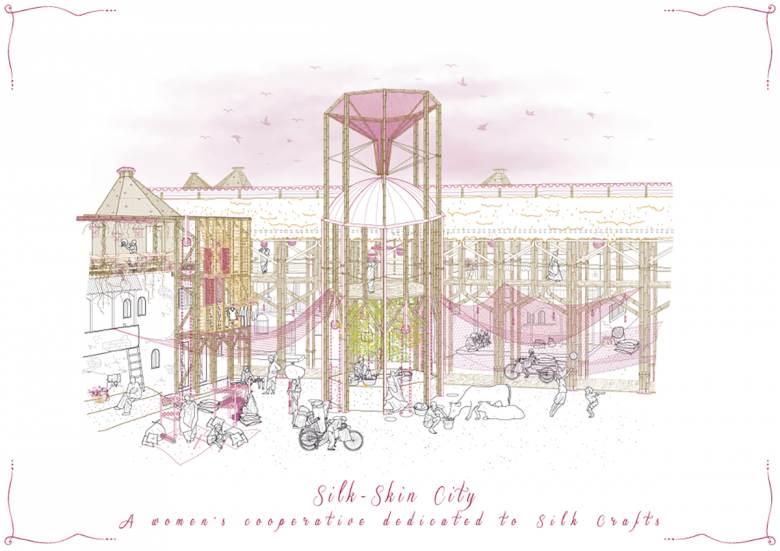 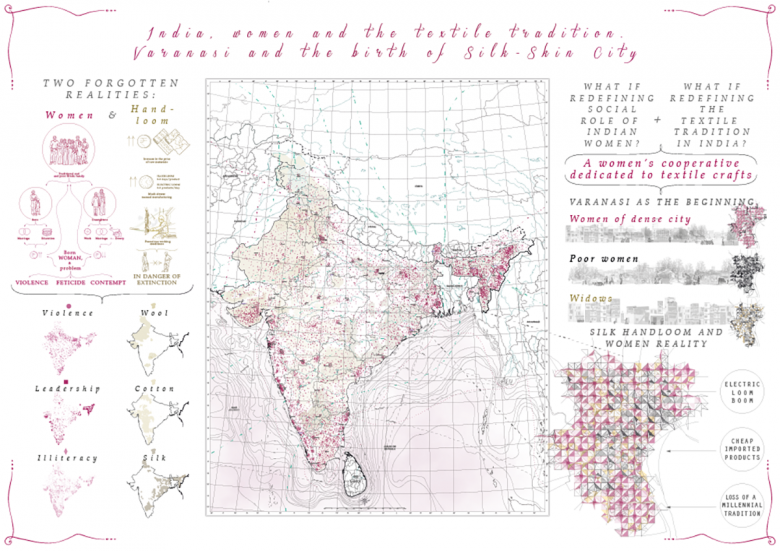 India, Women and the Textil Tradition 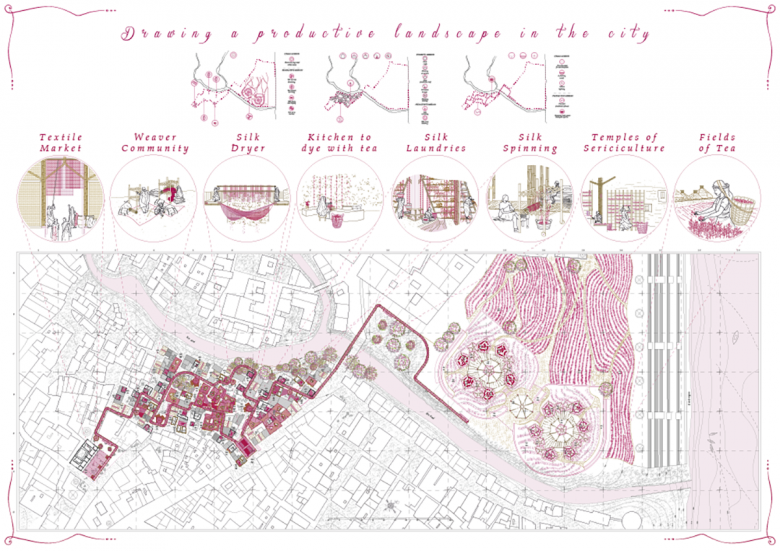 Drawing a productive landscape in the city 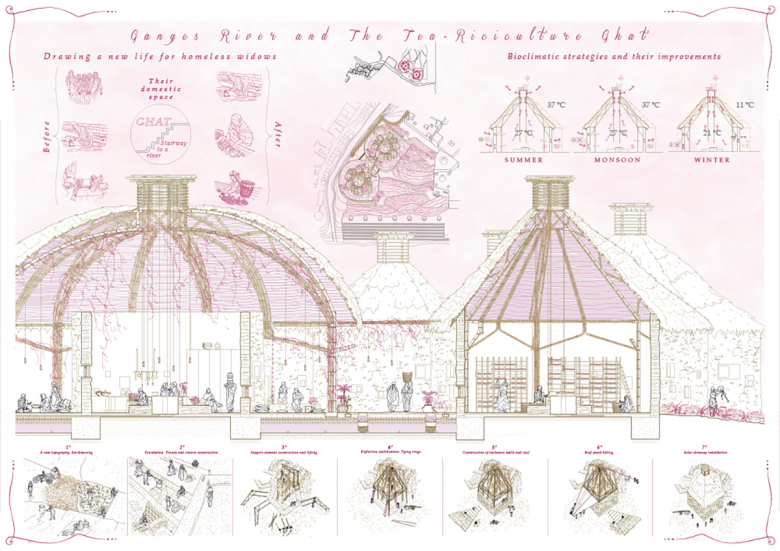 Ganges River and The Tea-Riciculture Ghat 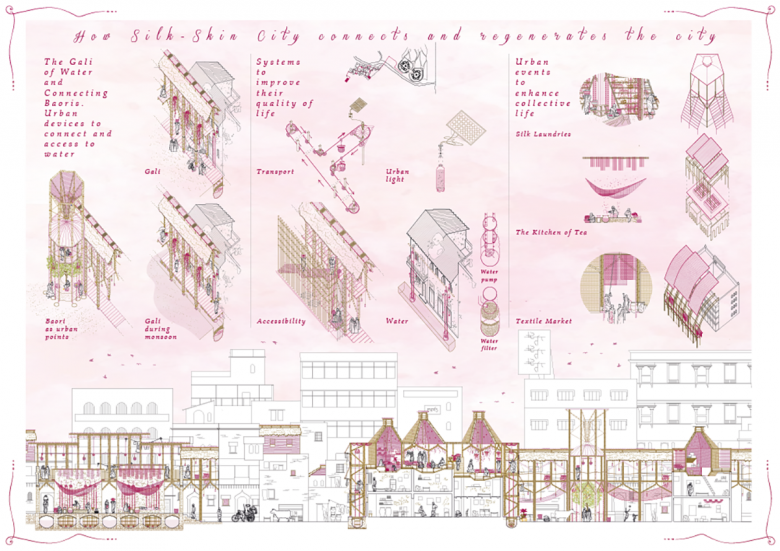 How Silk-Skin City connects and regenerates the city 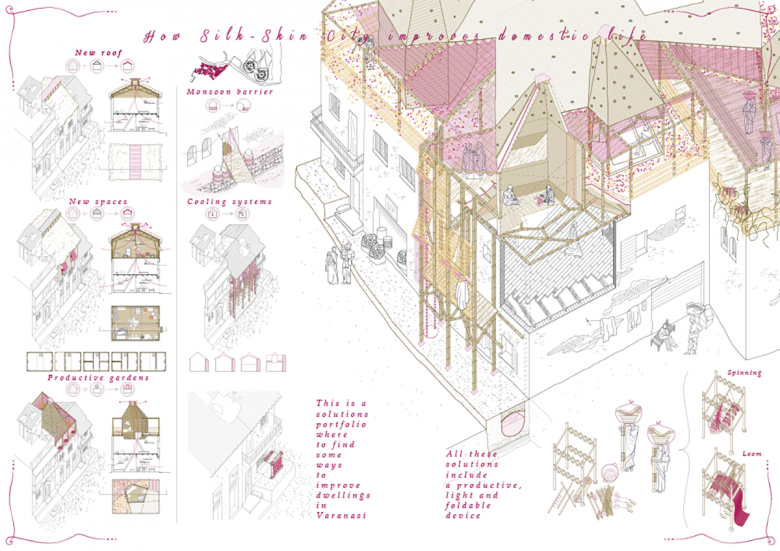 Teaching a city how to be resilient

Silk-Skin City carries out research on the possible contributions of Architecture to the redefinition of the role of Indian women in their society. It is presented as a textile cooperative of women, formed by productive events which are centered on the transformation of the silkworm into saree, as a strategy to recover an artisanal treasure.

India is starring a society that struggles to emerge from an abolished but still latent caste system and is also defined by deep poverty and social inequality in which children and above all, girls and women play the most disadvantaged role. Such events make it a problem to be born a woman in India. Gender-based violence, selective abortions, and contempt for women is a common constant across the country. The problem that is being faced by women is attributed by many authors to the Neoliberalism that was imposed in India after the Independence in 1947, which also meant a great growth of Indian industry and the gradual disappearance of one of the country’s great treasures: the manual art of textile work.

In such circumstances, Silk-Skin City was born in Varanasi. This urban and productive installation will bring together all the ways of being women that inhabit the city. For this, Silk-Skin City is structured in productive events that define the production process of silk saree. On the one hand, urban productive events will revitalize degraded urban voids. Among them, the Tea-Riciculture Ghat, the Silk Laundries, the Kitchen of Tea, common biogas kitchens where silk is dyed with tea and dried recovering the dye for cooking, and the Textile Market. On the other hand, domestic productive events introduce the productive character into the domestic scale through a productive, lightweight, foldable, and transportable device. In addition, these domestic productive events are presented as a catalogue of solutions that improve the housing and climatic conditions of the dwellings, such as new roofs, home extensions, productive gardens, anti-monsoon barriers, and cooling devices, that achieve a reduction of the indoor temperature by almost 10ºC. And all these productive events are connected by two urban devices. The Gali of Water offers a street with two levels, with floating potential and equipped with solar bottle urban lighting, a solar freight transport system, an urban accessibility system based on hand lifts, as well as water for consumption. Meanwhile, the Connecting Baoris offer urban points to access to water, as well as spaces for loading and unloading goods. The materiality will be based on the use of local and recycled materials and on a constructive process that can be carried out by all the women. In this way, Silk-Skin City draws a new productive, urban and social landscape, teaching the city to be resilient to the monsoon, while defending the textile tradition, not only as a strategy to recover a treasure from the past, but also as a construction of a philosophy that defends work with hands, to face our highly mechanized world. And all this while demonstrating that Architecture can contribute in redefining the role of women and with that, building a healthier, freer, and fairer world.