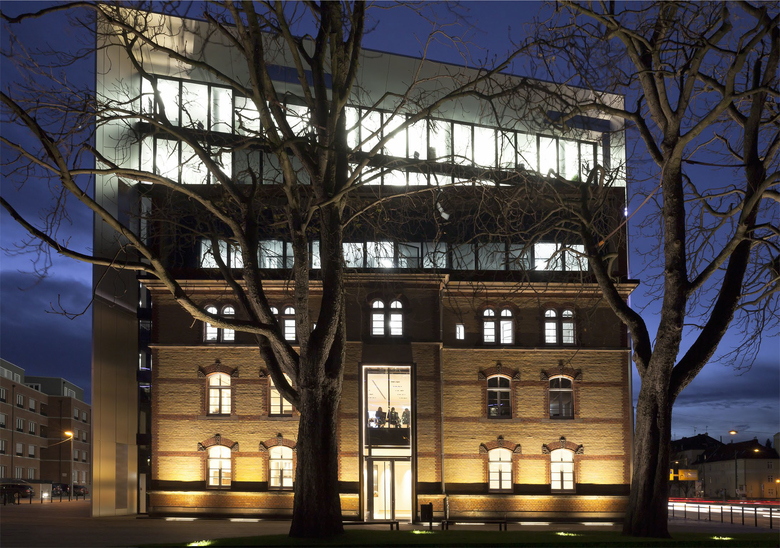 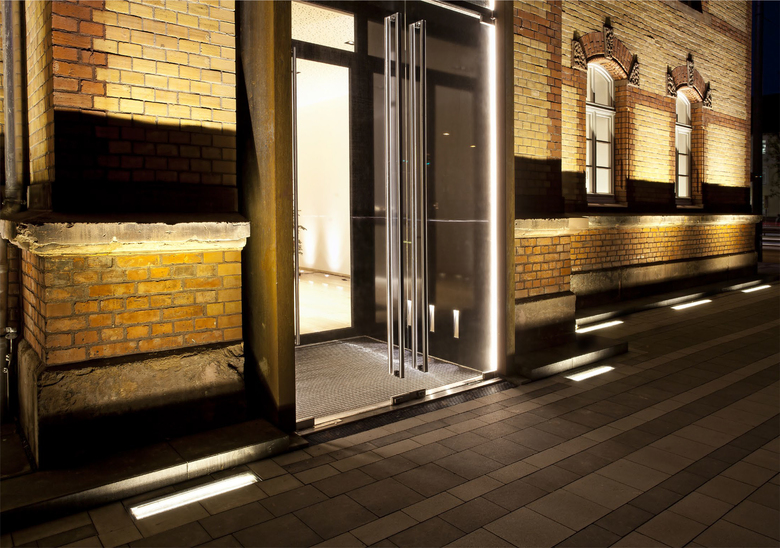 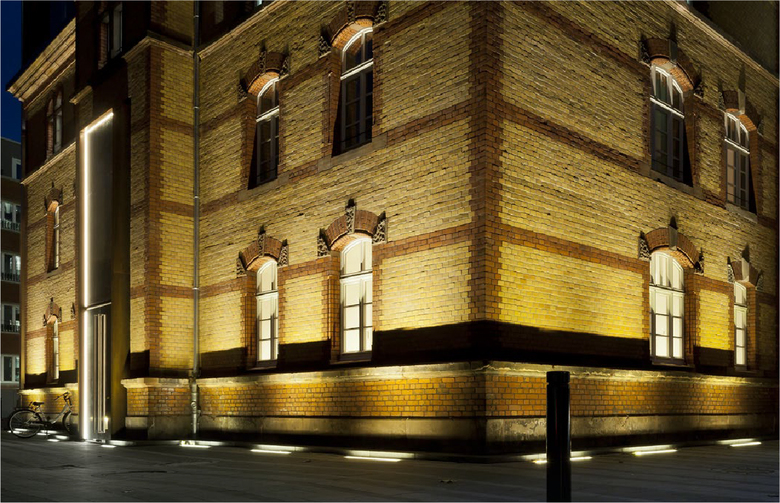 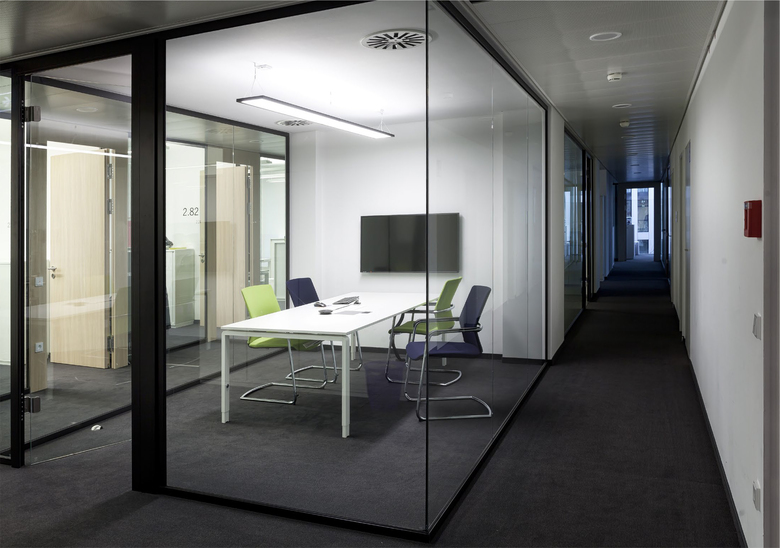 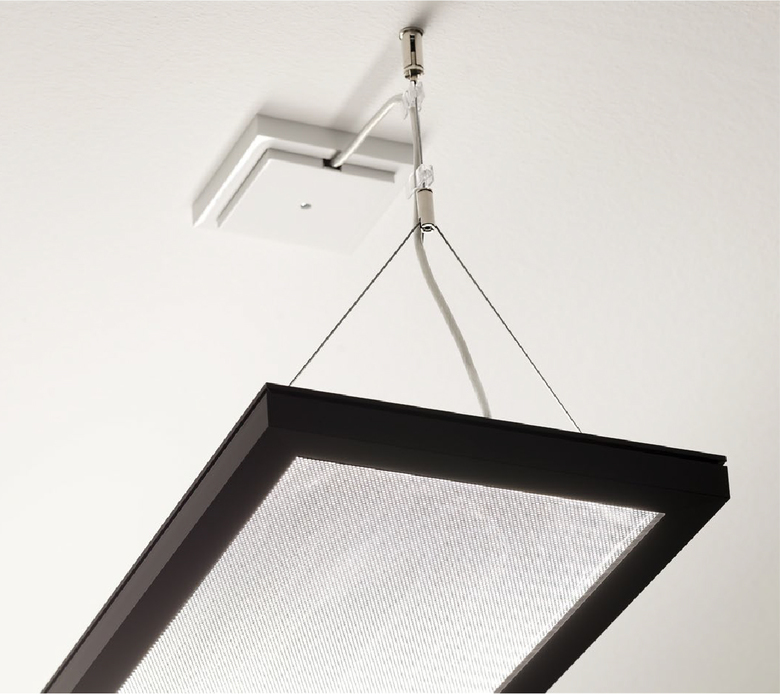 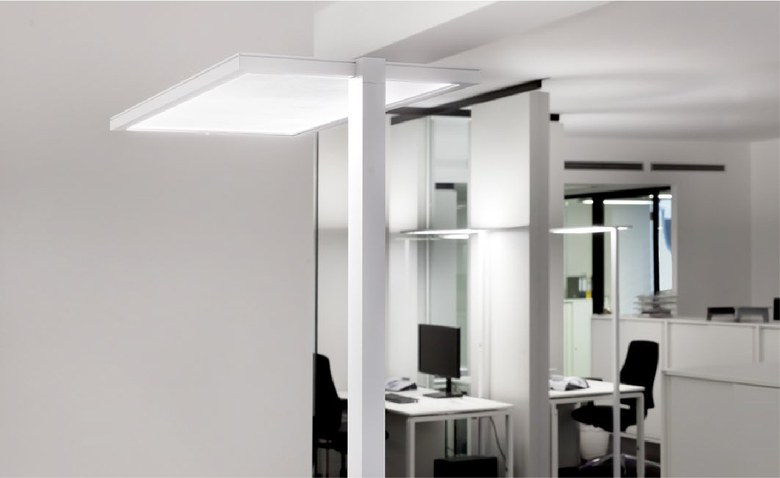 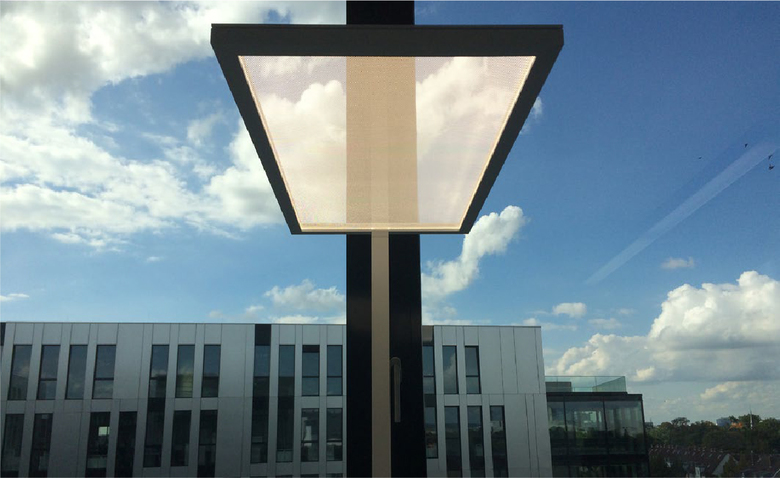 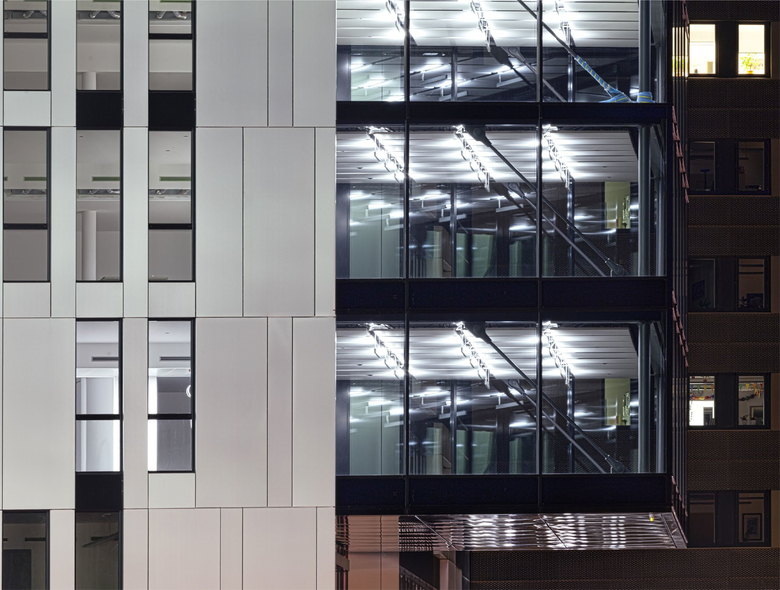 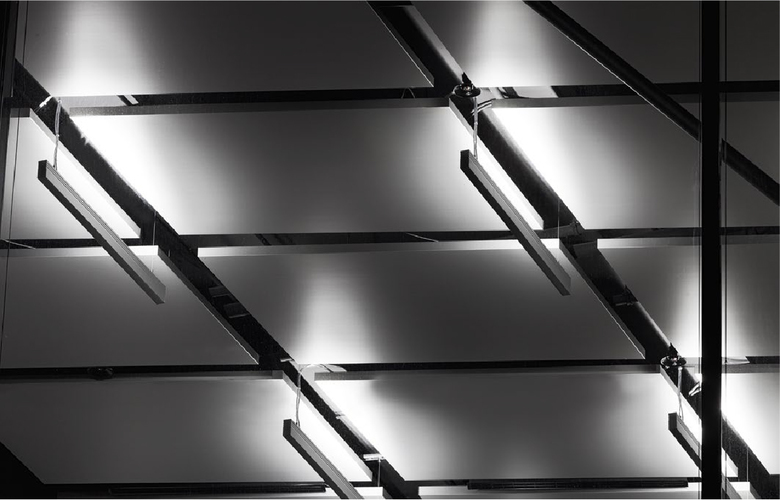 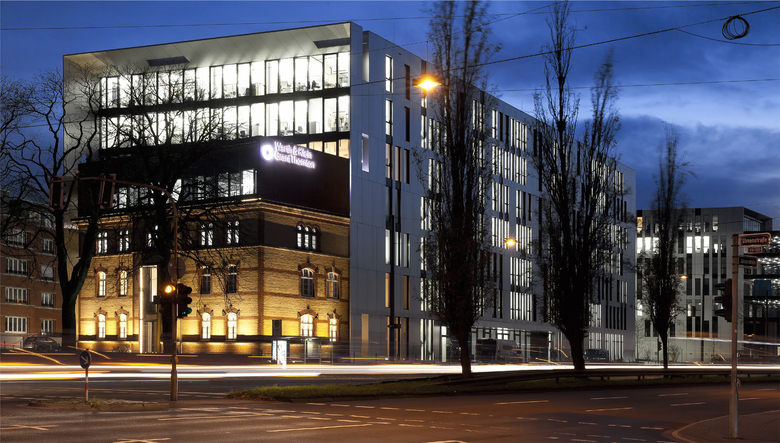 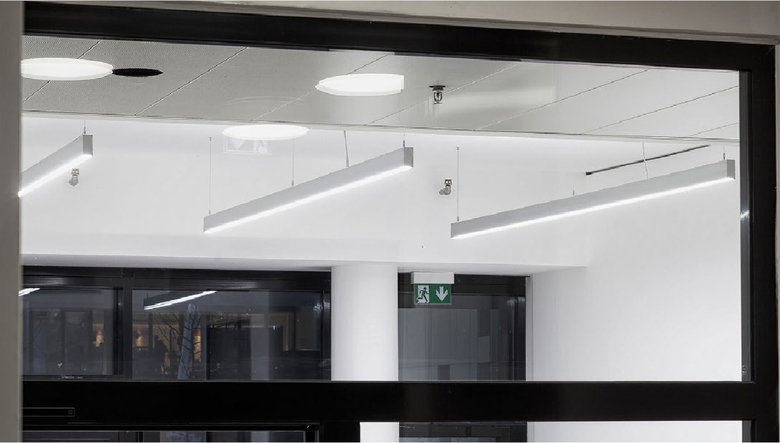 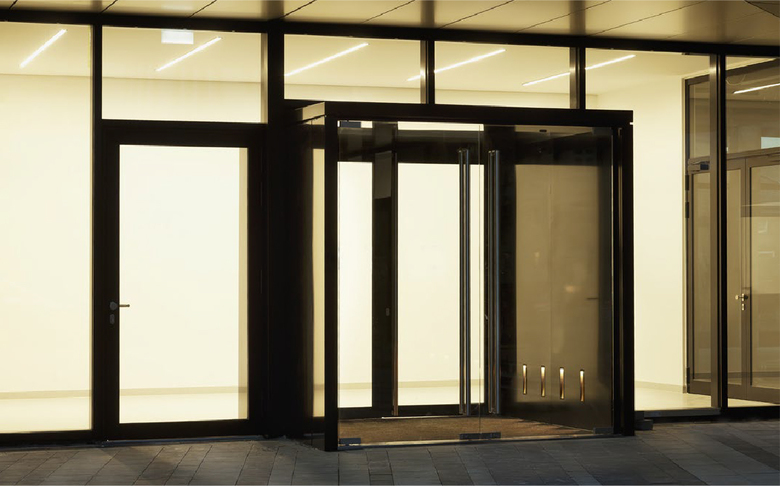 Sophisticated and Efficient
With its brick walls, a part of the former barracks seems to emerge from a new building. Its metallic outer skin, with its small, irregularly arranged windows reminds one of a piano keyboard. And this impression does not spring from nowhere: this ensemble in the Derendorf district of Düsseldorf is called »Clara & Robert«. This name pays tribute to Robert and Clara Schumann: After all, from 1850 the composer, supported by his wife, was the municipal director of music in Düsseldorf.

This striking ensemble was planned and realised by the architectural office of sop slapa oberholz pszczulny architekten. The impact is emphasized by a clear light concept: The interior and the exterior lighting of the two closely interlinked buildings, which together with the adjacent new building cover an area of approximately 19,000 square metres, stems from a single source. ADO Lights, a TTC Timmler brand, has equipped the buildings.

Façade illumination
»Robert«
On »Robert«, Lightlines integrated in the façade, guide the viewer’s eye to the entrance area of the so called Saarhaus of the former Ulan Barracks. Wallwashers, whose angles can be individually chosen, illuminate the old walls from below. LED Drainlight was selected for this: The stainless steel housing has a glass cover to ensure that neither dirt nor withered leaves can affect the radiant power of the illuminants. From a practical point of view: When – someday – the long-lasting illuminants need to be replaced this can be done in just a few simple steps. Internal metal channels ensure that condensed water and rainwater can drain away easily.

The Wallwashers and the Lightlines emphasize the historical part of the ensemble. This sparingly ornamental effect is continued in the interior lighting. It is a silent aesthetics that corresponds with the reliable public perception of the anchor tenant – auditing firm Warth & Klein Grant Thornton. The firm has merged its various locations, which had been scattered throughout the town, in the »Robert« part of the building and now occupies 7,400 square metres.

Illumination for conference and meeting rooms
The newly created offices were equipped with the LED Around. As a pendant luminaire it lights conference and meeting rooms, offering both, a slim minimalist aluminium profile and a high-quality finish. Switched off, the illuminant appears transparent and thus has a light and airy appearance. Microprisms embedded in the glass may be visible as tiny dots. Switched on, LED Around provides a pleasant, homogeneous light, 40 per cent being emitted upwards and 60 per cent being emitted downwards. The luminaire is infinitely dimmable, a big advantage, for example, when using a beamer for presentations.

Workplace illumination
The workplaces were equipped with the LED Around as a freestanding luminaire. This does not only ensure the mandatory 500 lux per desk. Thanks to their intelligent but primarily energy efficient overall concept the sensor equipped luminaires automatically react to any increase or decrease in daylight. Each luminaire is equipped with a presence detector: It detects whether or not a person is at his/her workplace and switches the luminaire on or off accordingly. »Swarm circuitry« ensures a pleasant ambience. It can be used to combine several luminaires in a network. This means that workers from this group, who are present, have full light on their desks, while other unoccupied desks in this group are illuminated with just ten per cent of the possible light output. Hence, no one needs to work in an otherwise dark office. Even when the last employee leaves the office, the freestanding luminaire provides 10 per cent of its light output for another 15 minutes before it finally turns off.

Basic illumination
»Clara«
In the »Clara« part of the building, ADO Lights has contributed flush fitted wall luminaires as well as the lighting in the foyer. LED Linargo was used as both a recessed and a pendant luminaire. Special features: a filigree profile, a high-quality finish, a totally homogeneous light. Efficiency was once again paid attention to. The operation of the recessed lights can be programmed to emit less lumens at night or to provide emergency lighting in case of a power failure. As a pendant luminaire LED Linargo emits indirect illumination upwards and direct but still glare-free illumination downwards. During the hours of darkness the luminaire can be switched to indirect illumination. For example, if illumination of the building is desired – simply because exceptional architecture should also be visible at night.