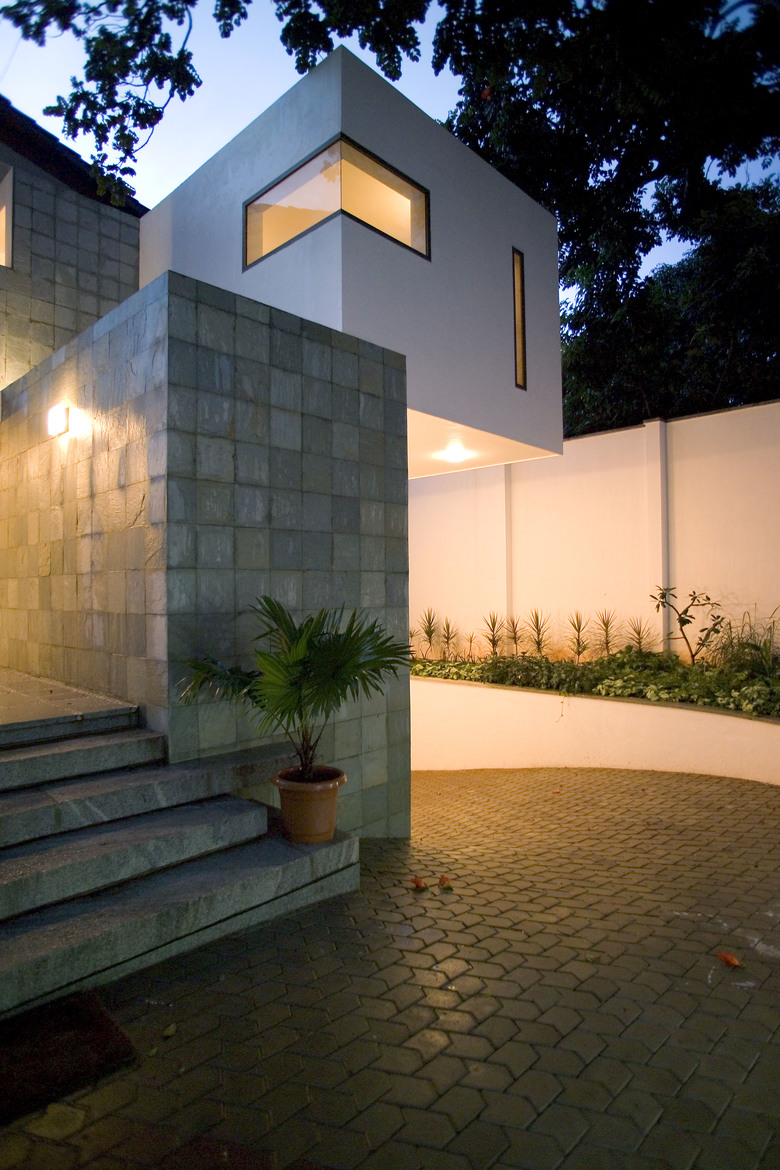 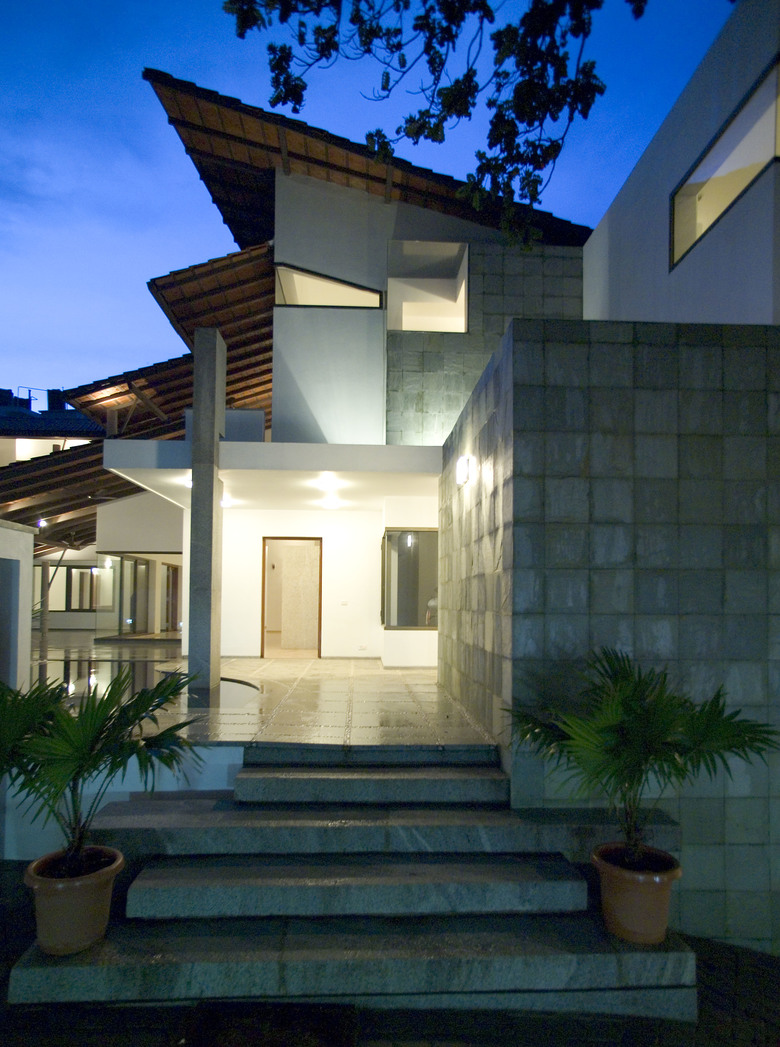 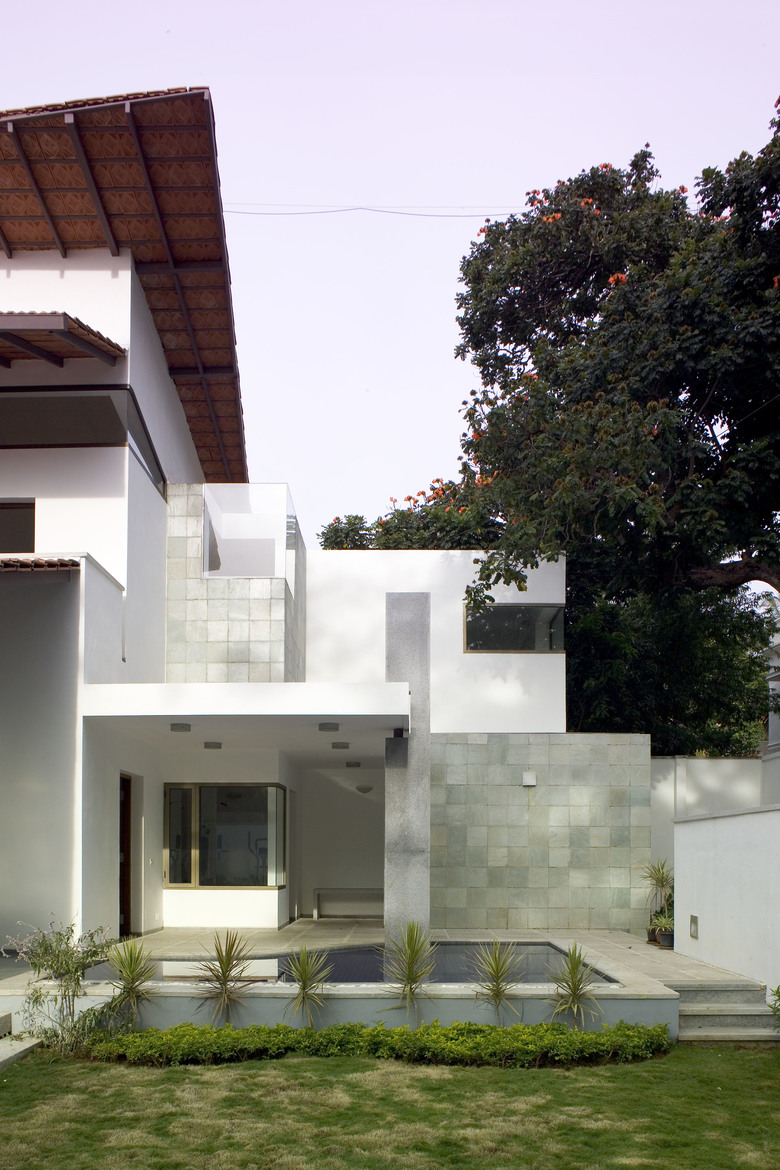 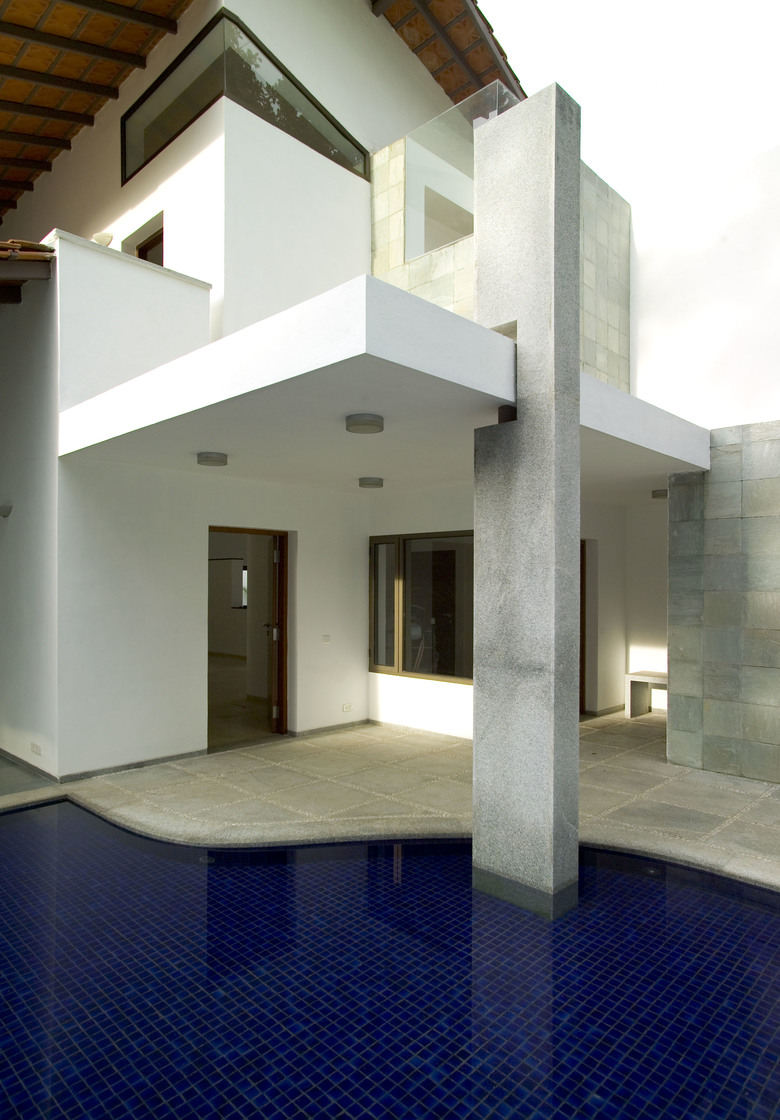 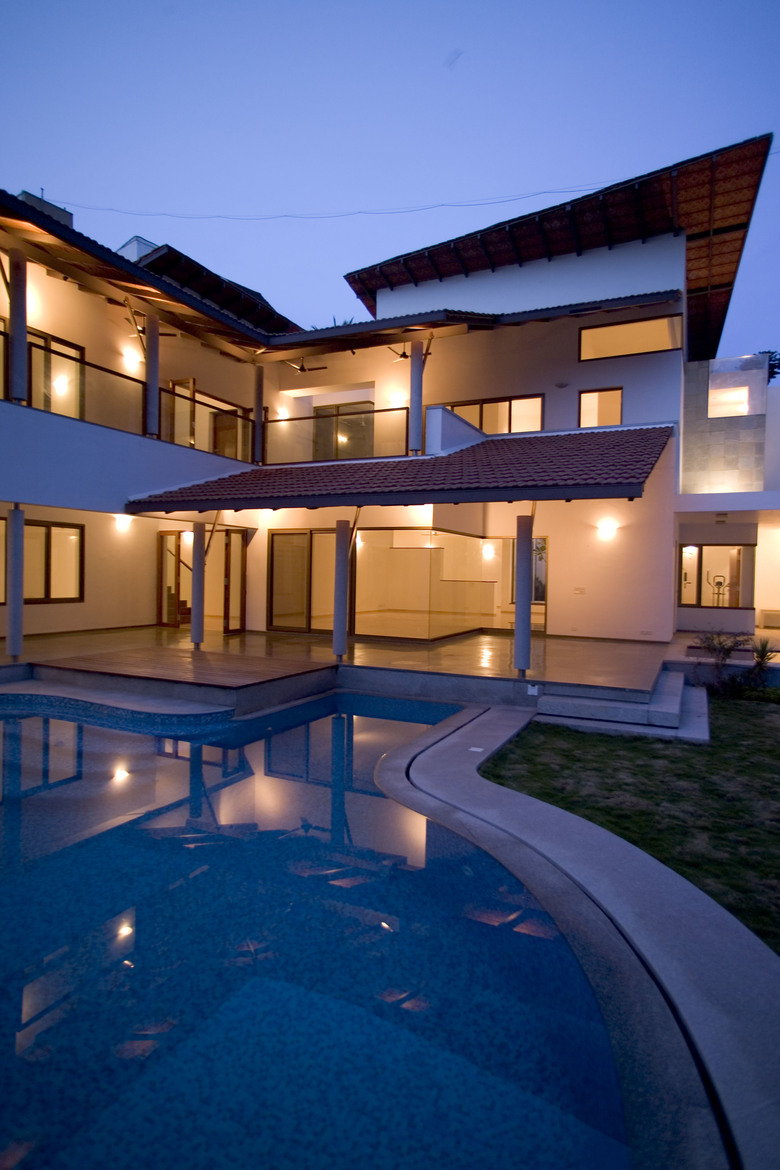 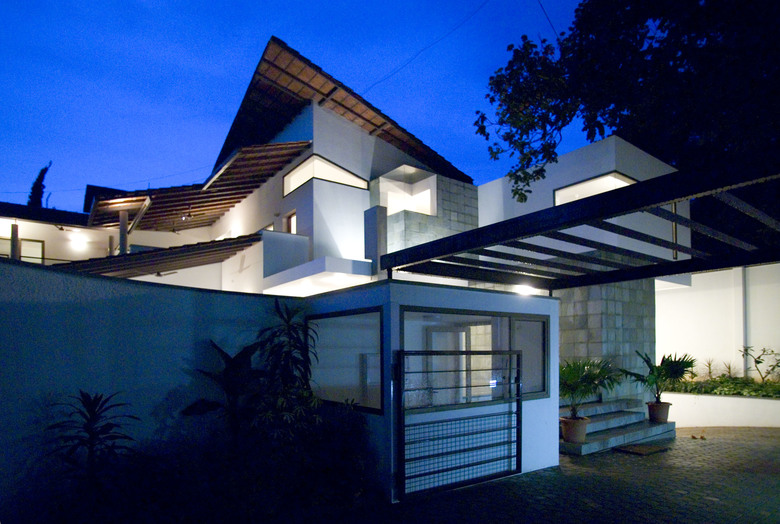 The Fernandes’ wanted a large 6 bedroom home which would in addition accommodate a large basement for parking, a swimming pool, and an adequate garden.

The architects were briefed that there must be adequate light, and movement of air through the house.

The 9,600 sft site is located in a private cul-de-sac, a few minutes from the heart of Bangalore’s central business district.

We chose to design a climate sensitive architecture with sloping tiled roofs and large overhangs to combat the heavy monsoons. Semi permeable spaces such as an entrance court and large expanses of verandah take advantage of the tropical climate of Bangalore.

The constrained views on the north and east of the plot (due to apartment blocks built close to the compound wall edge) prompted a design that was inward looking towards the south and west. A rain tree of huge proportions outside the southern wall of the house partially shields the south from the fierce sun.

The house in concept takes on a functional L shaped arrangement facing a large garden with a swimming pool. Large L shaped verandahs flank the garden and keep the south and west elevations cool.

We stressed on design innovation in certain architectural elements – windows, columns and steps were treated in new ways and the form of the house was crisply articulated with contrasting textures.

Linear abstract compositions, an unexpected play of natural light falling on varying surfaces and an interpenetration and juxtaposition of elements creates a rich design vocabulary.

The use of local material used with a modern design sensibility, skewed vernacular roof forms, and a fresh interpretation of traditional concepts such as the court or the verandah, gives the contemporary vocabulary a sense of context.

One enters the house through an entrance court with a shallow reflecting pool clad in turquoise handmade tiles that guides the visitor to the main door. A looming canopy is supported at a single point by a vertical pier clad in flame finished stone, seemingly clasping its horizontal plane.

The entrance steps to the court are 6” thick dressed monoliths of sadharhalli stone stacked one over the other like shifting planes. Certain planes and forms in the south elevation are punctuated with a lime green rough slate cladding.

The public and semi public spaces such as the living, dining, kitchen, utility, study and 2 guest rooms are on the ground floor. A staircase clad entirely in teakwood takes the viewer to the private spaces such as the bedrooms and family area on the upper level.

The house intentionally looks towards the south west flanking a private road with a huge rain tree. The west, north and east sides of the plot were flanked by houses and apartment blocks built extremely close to the compound wall.

The massing of the house is L shaped and orients itself to a singular lung space in the south. Verandahs on the lower and upper floor covered with sloping Mangalore and Kerala tile roofs overlook this area. The swimming pool is organic in shape and intentionally hugs the lower deck, thus leaving space for an adequate garden.

The east – west axis of the house allows for complete transparency through the main living areas. The axis towards east culminates in an intimate court with a single temple tree. Both living and dining areas look into this court. The axis facing west leads to views of the verandah, pool and garden beyond.

All the bedrooms on the lower and upper level step out into a verandah and overlook the main lung space. The design ensures that each room gets good views as well as cross ventilation.

One of the interesting innovations in the Fernandes house are the columns that support the tiled roofs of the verandahs on both floors. The round columns are chiseled out of blocks of Quera stone available locally in the outskirts of Bangalore. Steel spacers elevate the stone from the floor and stainless steel arms bolted to the stone hold the roof. The capitals of these columns are free from taking the load of the roof. The load is transferred diagonally via the steel struts to the columns. A further detail to be noted is that an up lighter embedded into the top of each stone column gently washes the underside of the Kerala tiled roof. A groove was inserted into each stone column, an electrical wire passed through it and then concealed with a steel spacer.

The results of this detail are particularly evident after dusk when the house is illuminated.