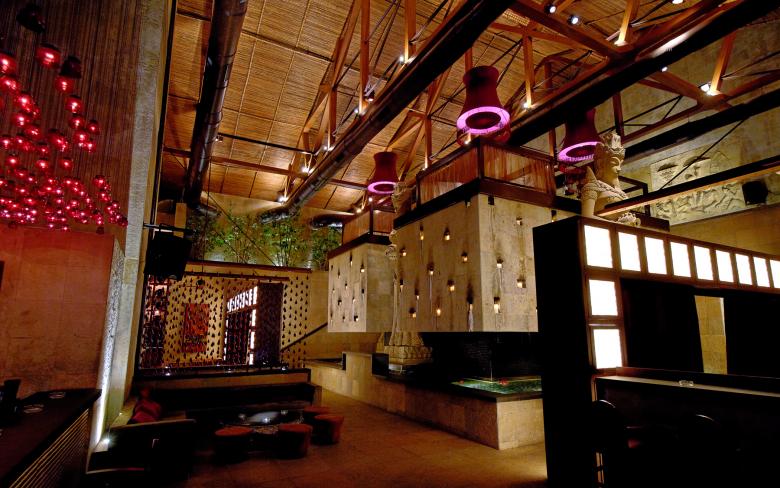 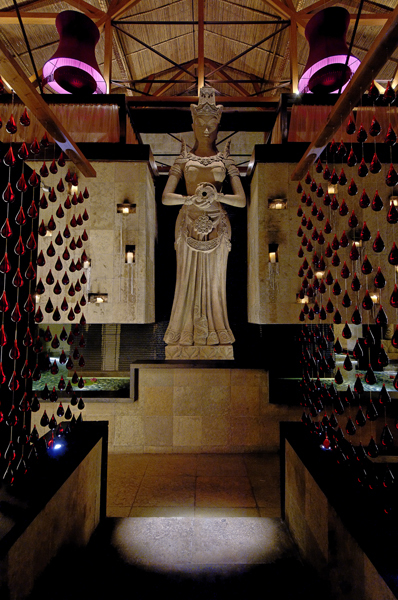 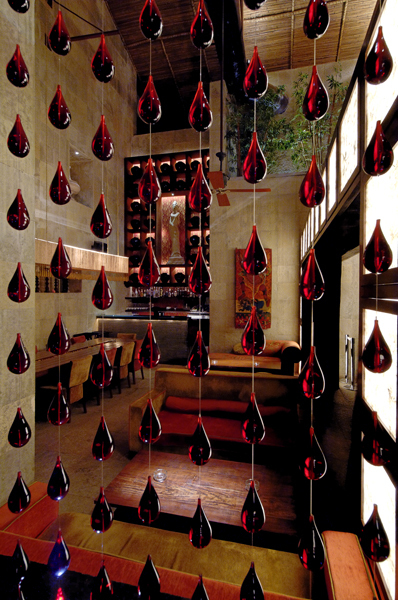 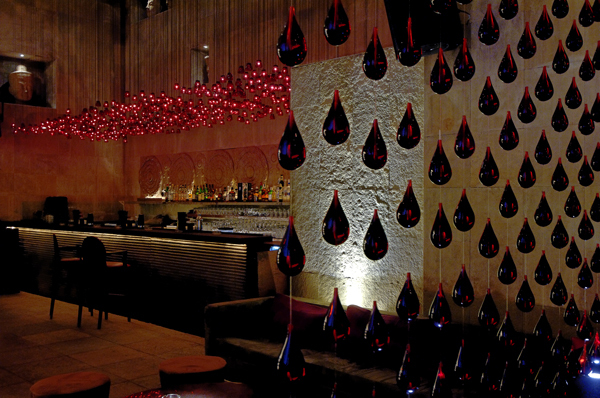 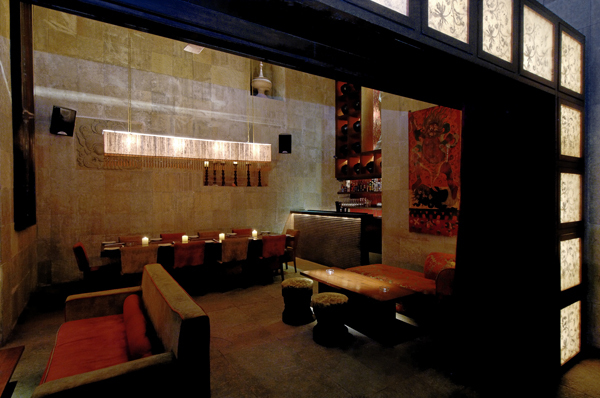 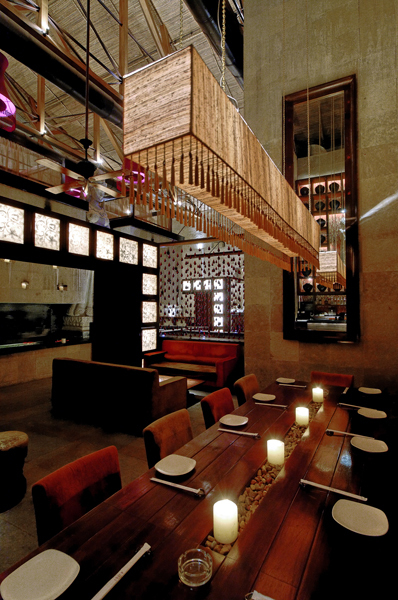 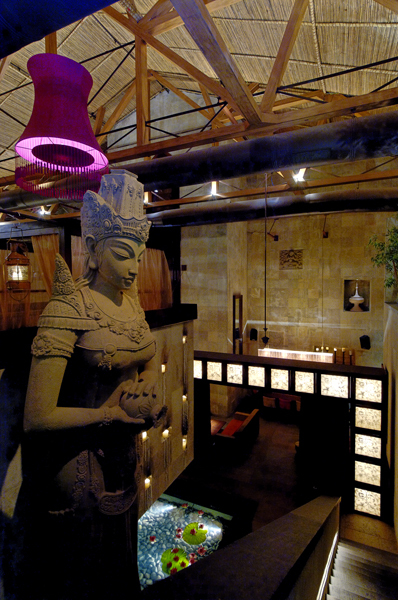 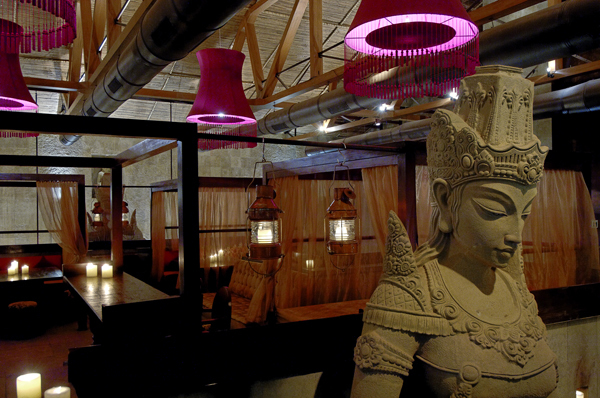 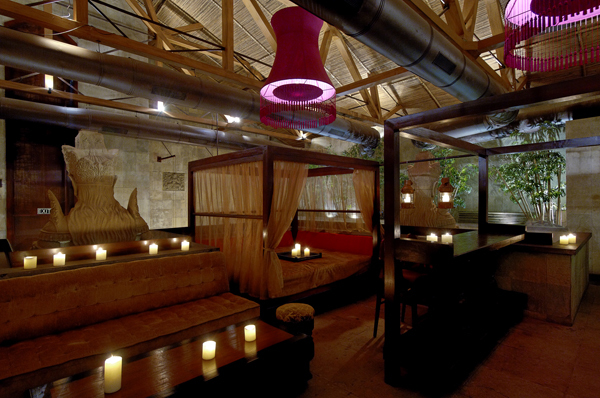 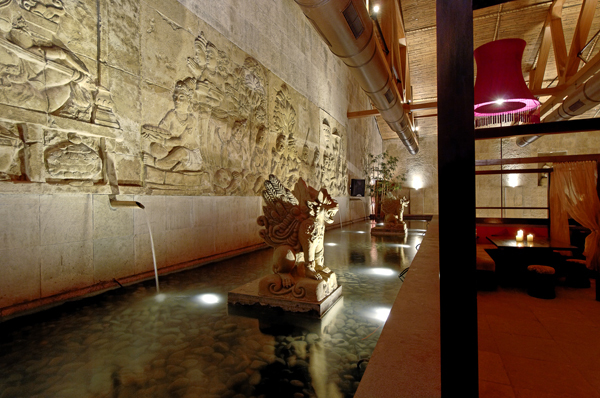 We were commissioned to design a Pan Asian lounge bar within the unused Bombay Dyeing Mills. The space would need to be eclectic, sophisticated and engaging to endure the short, trendy tag associated with many lounge bars.

"Shiro", which in Japanese means “castle” has a mysterious aura as you enter its lofty proportions. Crane your head up as you enter through its fortress like doors and encounter the awesome proportions of a 45ft high bamboo clad dimly lit pitched roof. Dominating the central space are three 20ft high figures of Balinese consorts dropping water via earthen vessels into a large moat filled with pebbles and lotuses. These consorts guard an upper room housed in a cantilevered cube of slate stone replete with tiny niches for pillared candles. Water flows gently under this form on horizontal hand chiseled ribbed granite walls into the moat below.

The 4000 sift of space is primarily divided into 4 zones- 2 private rooms and the bar area on the lower level and stairs ascending to a private room on a 10ft upper level.There is a feeling of sensuousness and serenity in these private rooms, where an eclectic mix of discerning objects and furniture have been designed or sourced each offering a unique experience for lounging or dining.

The feeling in Shiro is surreal – a fantasy woven around the designers travels and inspiration of South East Asia . There are strong pan- Asian overtones and clever reinterpretations of traditional Japanese, Chinese and Balinese elements.

Highlights of the space are the perfectly proportioned south asian statuary and friezes blending in with the monocromatic rusic slate shell of the interior. Set against this backdrop are customized screens of red transluscent teardrops, a dramatic wall composed of repetitive Chinese urns in square niches backlit against a backdrop of floral silk - Or the two portals leading to the private rooms, reminiscent of Japanese shoji screens.

The 20 ft long main bar counter made entirely of hand dressed granite has a dramatic installation of about 500 tiny ruby red lights clustered at varying heights and resembling a galaxy of stars.