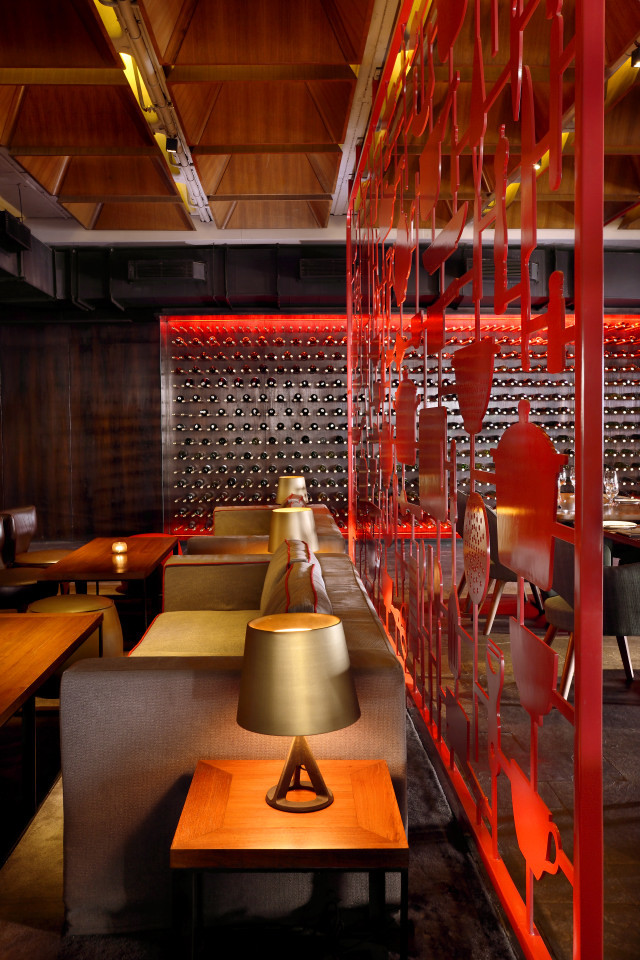 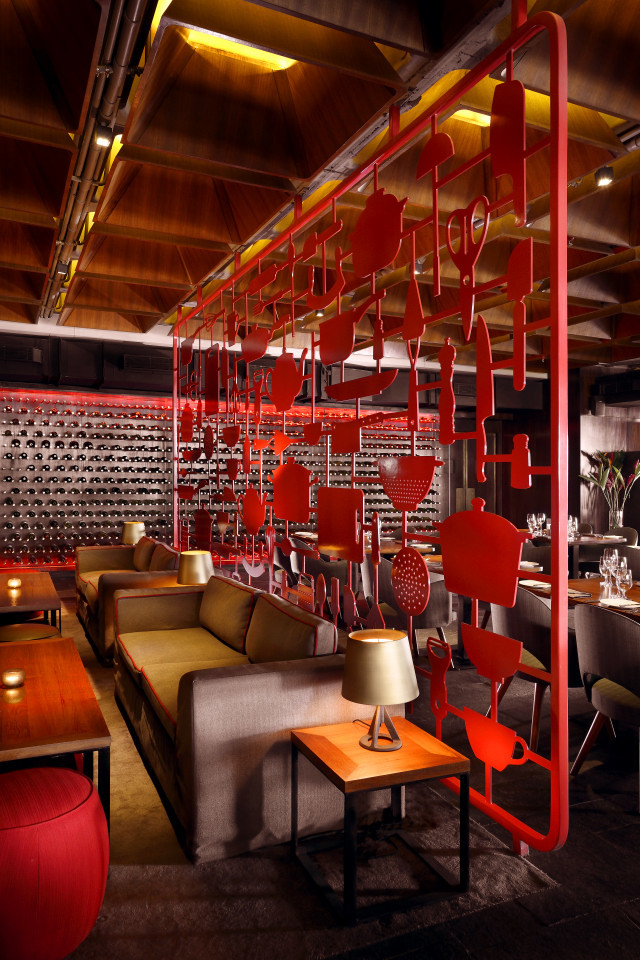 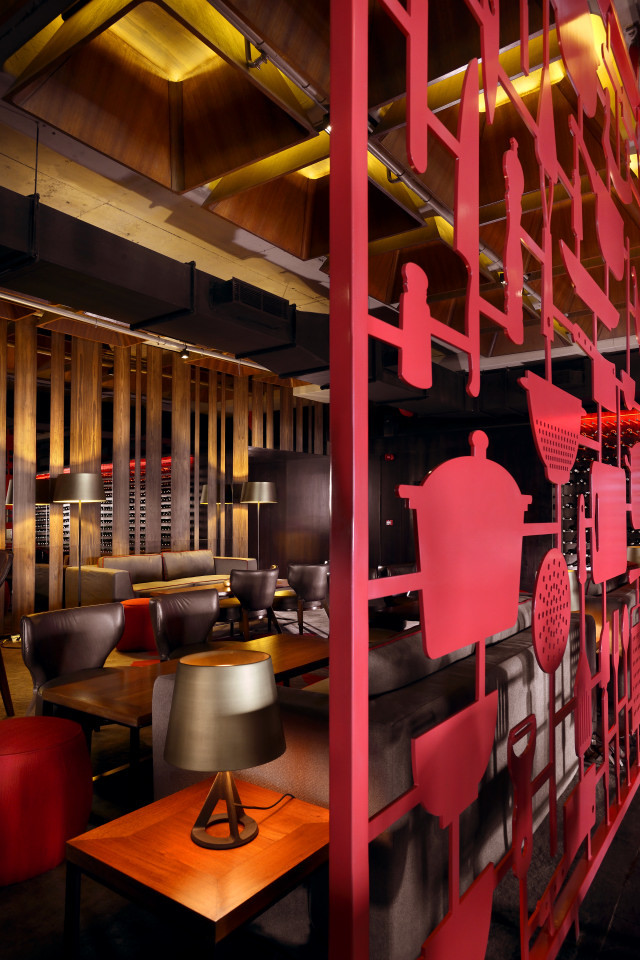 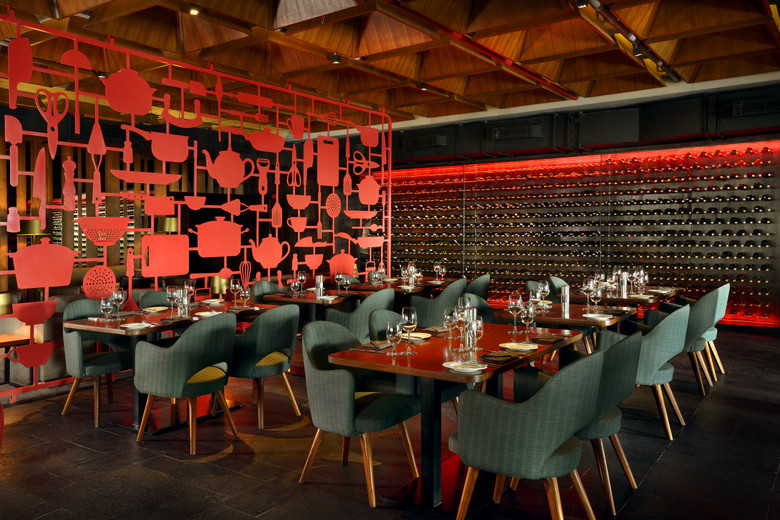 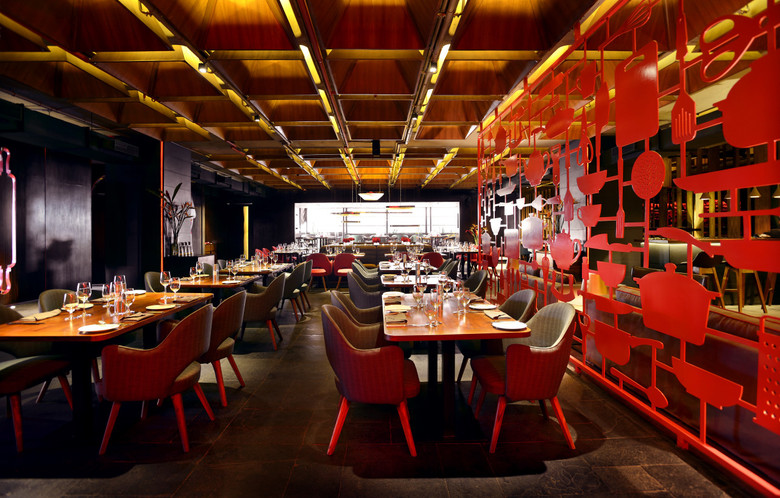 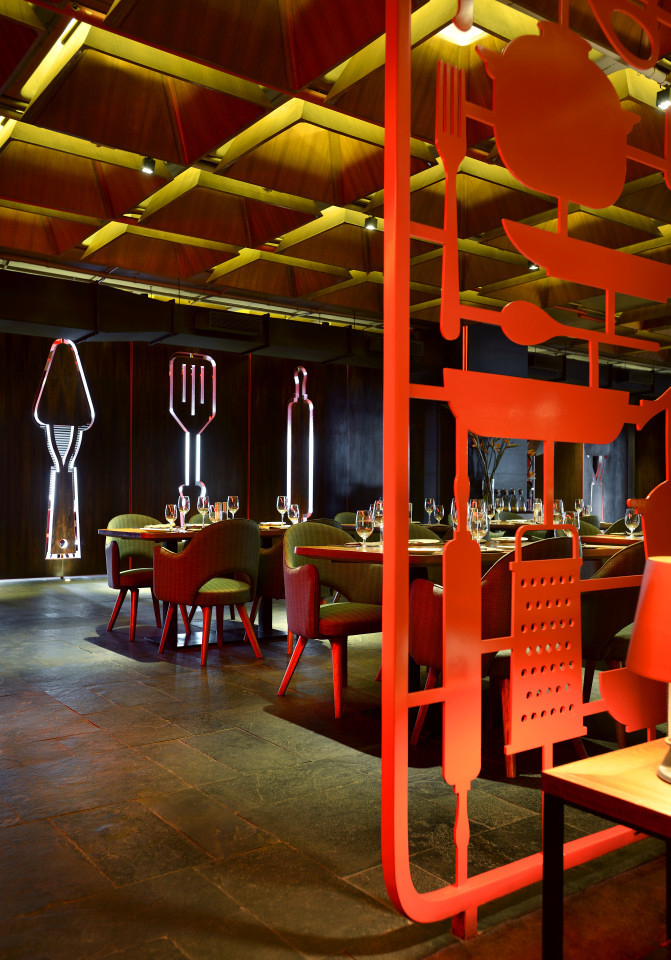 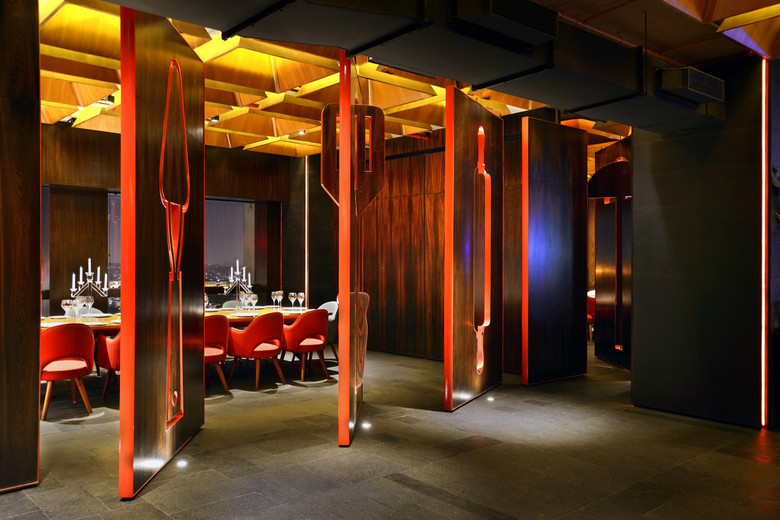 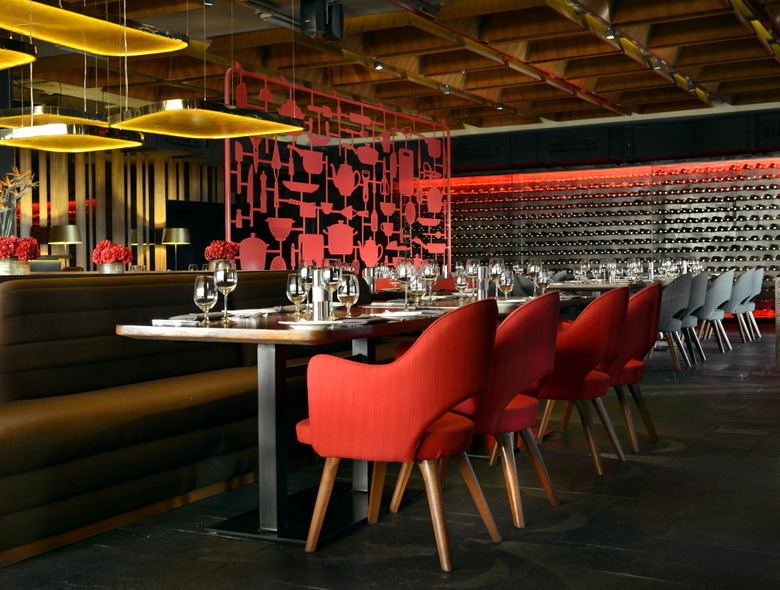 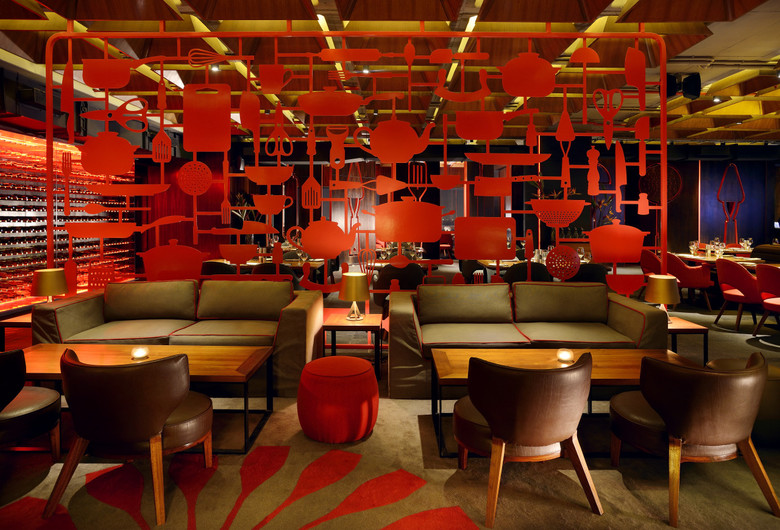 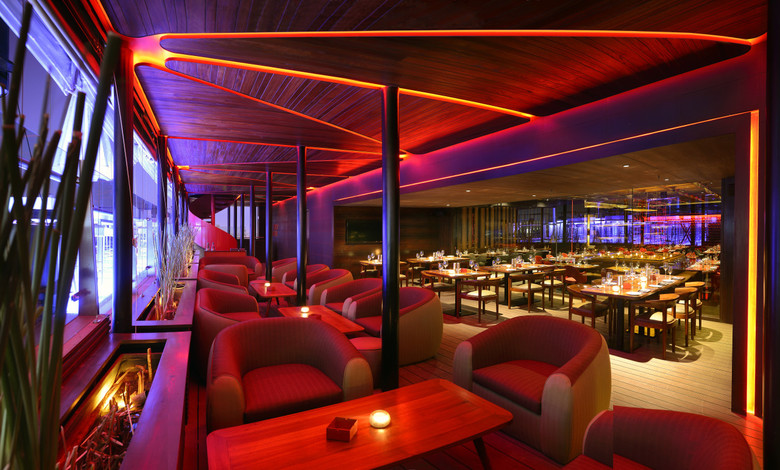 The new fine dining restaurant The Tower Kitchen in Bangalore shares it's location with the already popular nightspot Skyee bar promoted by the same owners.

The design was a collaboration between architects Khosla Associates and graphic designers tsk Design.

The name The Tower Kitchen is both imposing and warm. Tower - as it is perched on the 16th floor of one of the towers in UB City, Bangalore's epicenter. And Kitchen, because the focus here is on superb food, both experimental as well as comfort foods.

The brand identity comprises simple and bold typography - almost functional and basic, like a kitchen. Complementing this, is a playful graphic palette of kitchen utensils which are interpreted in varied ways both in pattern, scale and materiality.

The spatial layout has 3 zones : as you enter through a foyer at the north end, an intimate indoor lounge area greets you followed by the expansive indoor dining area and then finally into a semi open cigar and whiskey lounge that looks out from a height into the city lights. The dining area to the south has an exclusive chefs table and kitchen, as well as a zone for private parties and this is demarcated from the restaurant by a set of dramatic screens customized by the graphic designers. Giant outlined cut outs of kitchen tools clad in smoked veneer accented with red edges form pivot screens which allow for integration and separation of the fine dining and chefs tables from the main space. The utensil cut-outs themselves have the ability to rotate from their base creating and interesting layering and interplay according to the degrees of privacy required in the space.

The existing concrete coffered ceilings prompted an approach where the architects chose to accentuate rather than conceal it's features. A series of repetitive 3 dimensional wooden trapezoidal forms were inserted into each of the coffers, forming a warm textural ceiling grid. These were lit from within by LED lights within coves on each of the voids.

The flooring is a local black rough kuduppah stone cut in varying sizes. It flows seamlessly through the restaurant and up the vertical columns. It's monochromatic expanse is punctuated by feature walls at certain focal points. A 30 ft long wine wall bathed in a red hue, at the east end of the restaurant displays the restaurants extensive wine list. The array of of wines rest on rows and columns of brushed brass spacers emerging from a backdrop of dark veneer and washed from above and below in a red led light. The internal frame of the wine wall is clad in polished brass., The south wall of the restaurant flanking the lounge is clad in alternating strips of smoked mirror and wood.

Juxtaposing the contemporary warm space is a stunning screen, in which the graphic designers have transformed utilitarian kitchen utensils into a whimsical art installation. A grid of shapes – pots, pans, spatulas and whisks are laser cut out of thick metal sheet and linked together - drawing inspiration from nostalgic model moulds. Painted a bright post box red the screen forms an exciting divider between the lounge and dining spaces. Details of the 'kitchen art' reappear as tessalations and patterns on the bespoke carpet as well as beautifully crafted leather menus in grey and post-box red with smart masculine stitch details.

Central to the dining area is a seating cluster surrounding a central pebbled water feature. Hovering low above the water is an arresting suspension light fixture custom designed by the architects. The fixture has a series of planes of varying size suspended at differing heights . Each of the shapes is constructed of a double walled layer of translucent industrial mica sheets, lit from within with leds, and then encased in an edge strip of polished brass. The light installation with its fluid rounded edges and skewed sides draw inspiration/ recall the shapes used in the mid century Modern movement.

Other mid century style nuances include the fluid red and blue upholstered Saarinen inspired chairs, the service buffet counters with tapered legs, and the detailing of the timber clad ceiling.

The semi outdoor whiskey and cigar lounge area to the west has the option of dining as well as lounging. Comfortable lime green and chocolate loungers flank its periphery with a bar at one end overlooking the city view. A large wooden portal frames the internal restaurant via a sheet of glass and diners can gaze into the restaurant on one side and the buzz of a club on the other.