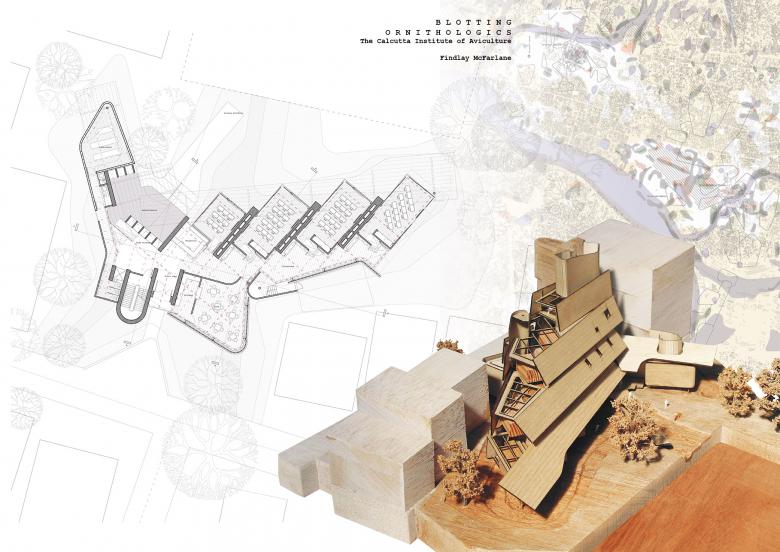 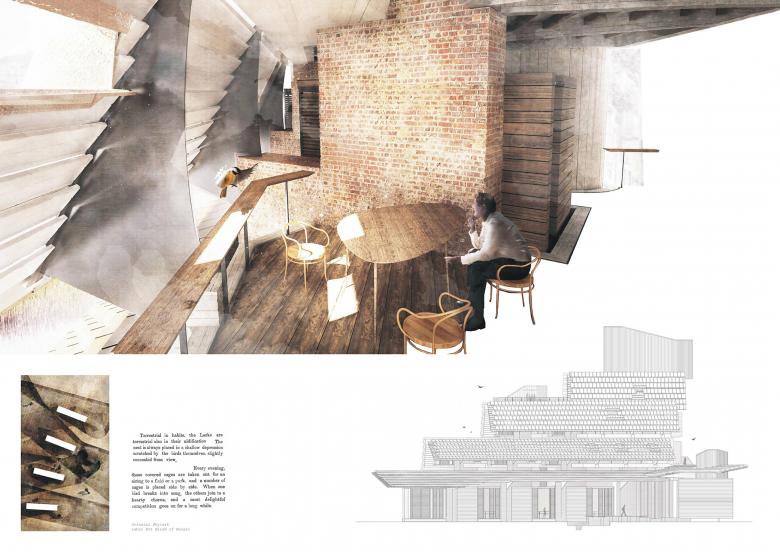 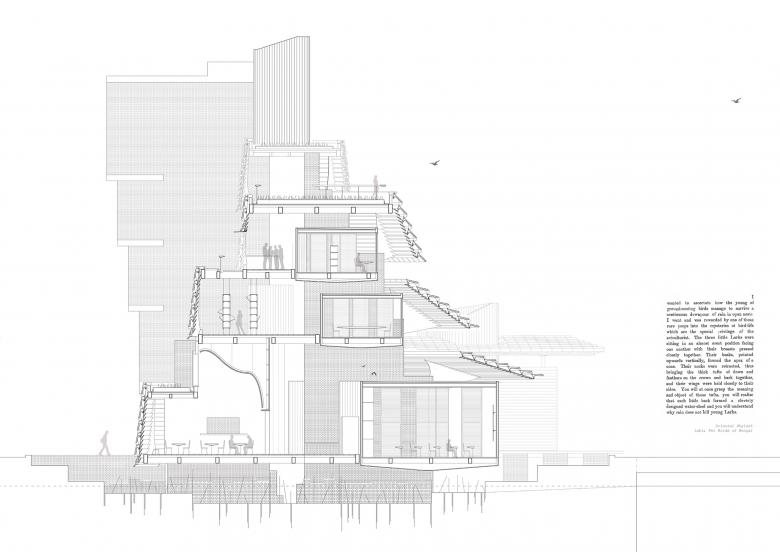 Why Rain Does Not Kill Young Larks
© Findlay McFarlane 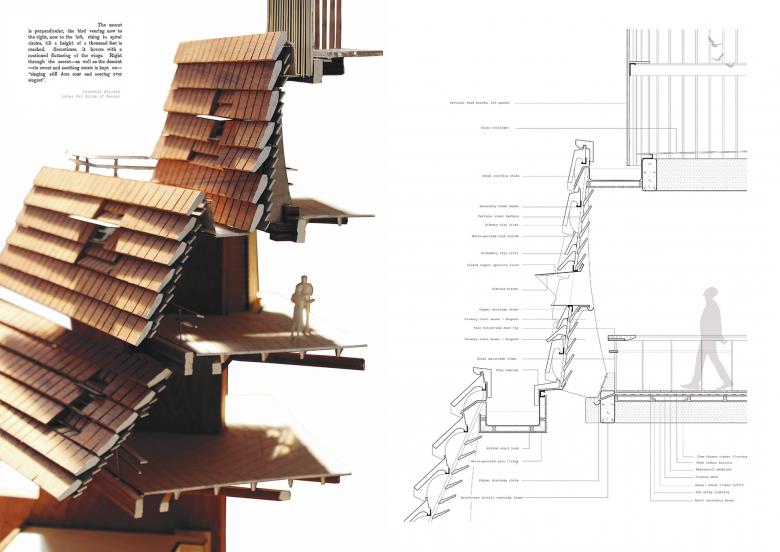 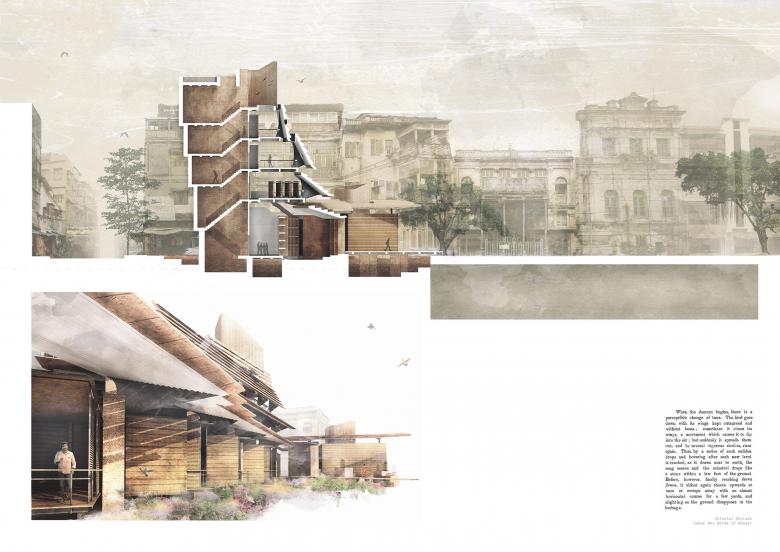 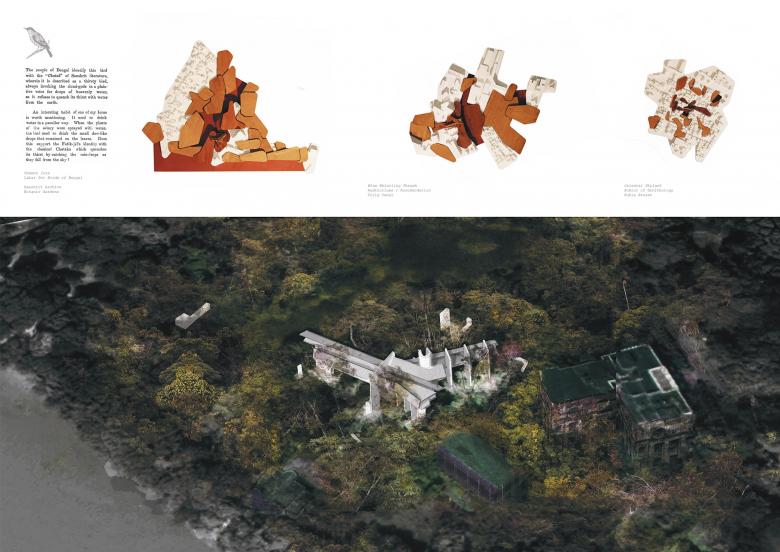 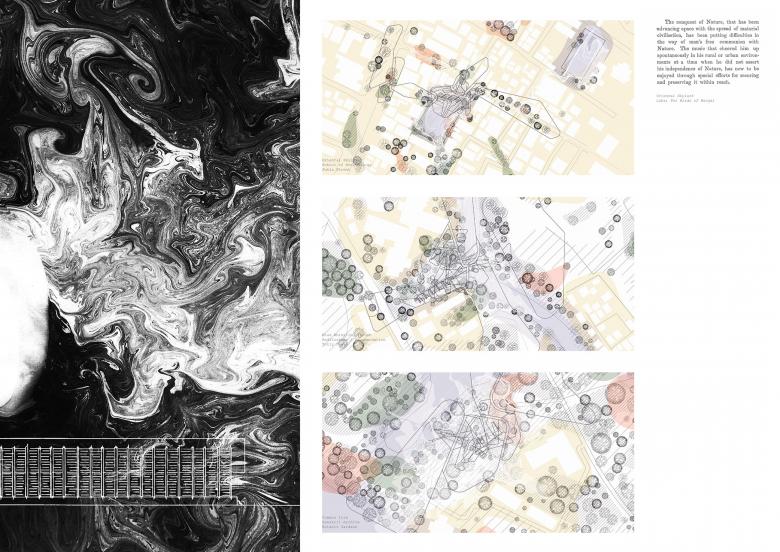 Pet Birds of Bengal in an Ocean of Wetness
© Findlay McFarlane

The Calcutta Institute of Aviculture

Blotting Ornithologics, through a new educational institution, harnesses the avicultural wisdom found in the ornithologist Satyacharan Laha’s Pet Birds of Bengal (1923), prioritising the logics of birds to challenge human lines of territory between city and jungle within a spectrum of wetness which blurs air, water and saturated land.

As it flies over the metropolis, a bird doesn’t see an aerial view of a city. It sees an intrinsically biological landscape. The bird can no longer exist in Kolkata as it has become, but instead demands the ecology of what Calcutta was, a new patterning of co-existence and architecture as mediator in an “Ocean of Wetness”. This manifesto by architects Da Cunha and Mathur makes the case that there is no hard line between wet and dry except those we humans have drawn ourselves. Calcutta is the most at risk city in the world from the rising sea levels, with constant flooding, especially in monsoon season, exacerbated by the concrete of the modern city blanketing the wetlands which once embraced the aqueous context.

The Oriental Skylark, embodied as a new school of ornithology in the dense northern heart of the city, learns from Laha’s descriptions of the bird and how it adapts to the “Ocean of Wetness” in his aviaries. The Ornithologics of the skylark manifest themselves in a way intrinsically linked with the wetness of the climate it inhabits. An open envelope provides shade, rain cover and air movement, creating an outside building which holds moments of environmental control, all drawn in different ways from the wetness below and all around. Heavy brick walls soak the wetness up into the building, and align with the prevailing wind to carry the emanated coolth through the building while teak classrooms between these walls are calibrated to control the passive cooling. This reintroduction of the ecology of the wetlands as “blots” of public space into a figure ground plan dominated by the private, is given specificity by ornithology. Finding their territories between layers of analysed species-specific requirements, architectures arise from logics not limited to our own, and situate themselves within overlaps of varying landscapes throughout the metropolis. Enriched by the supporting programmes of the Blue Whistling Thrush by the Tolly Canal and the Common Iora in the Botanic Gardens, this Institute of Aviculture draws in wetness as a network across the city. The sites form infiltration basins which slow water down and soak it away to alleviate runoff, while creating public landscapes from which the environmental and structural cores of the architecture rise. Through the oscillation of wet and dry seasons, each territory becomes increasingly inhabitable to its chosen species, until even the densest parts of the city bloom with that which once made them home not just to us. The breathability of the architecture, from the multi layered clay tile facade to the metropolitan “Blotscape,” embodies the essential attitude towards Calcutta as an “Ocean of Wetness”: there is no clear line between wet and dry, and at all scales these Ornithologics work with, not against, the omnipresent moisture.