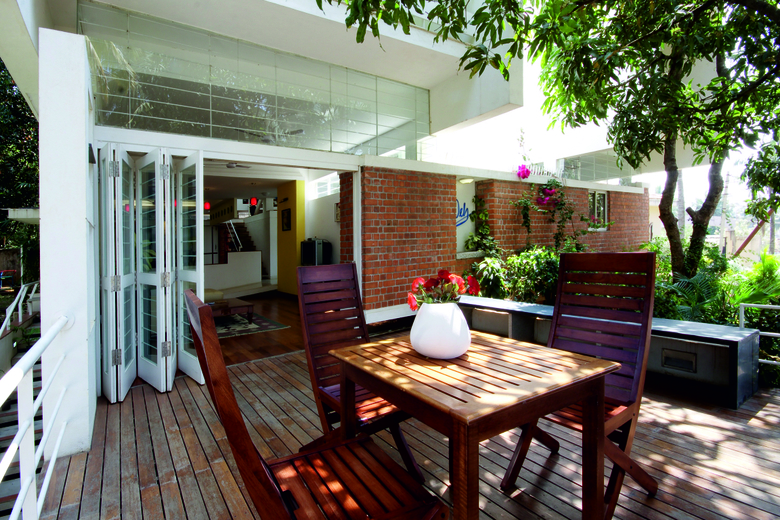 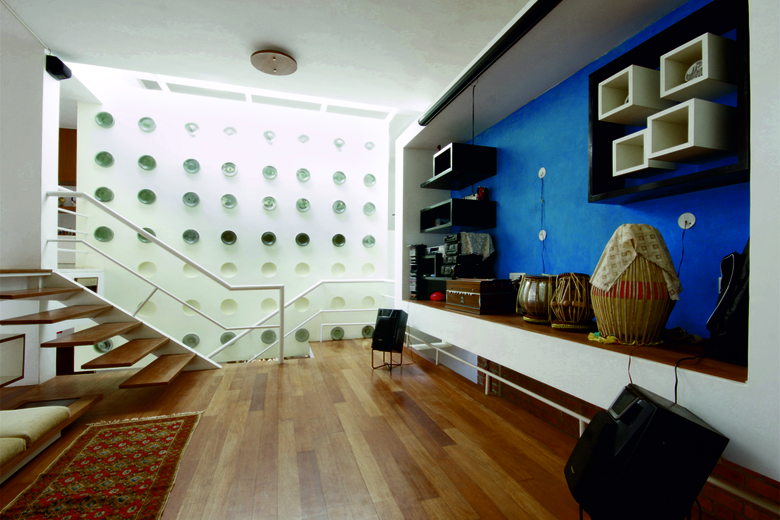 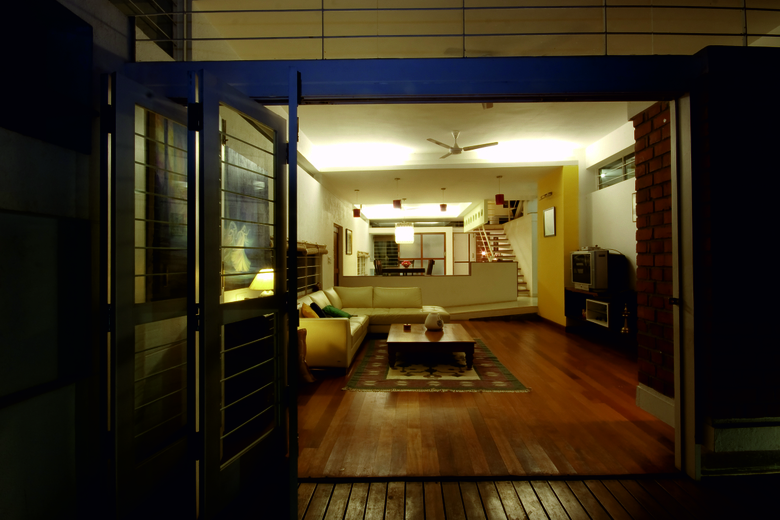 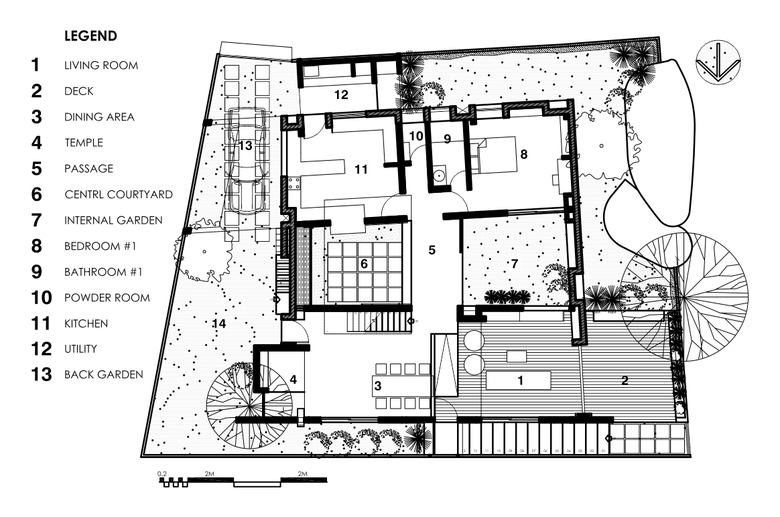 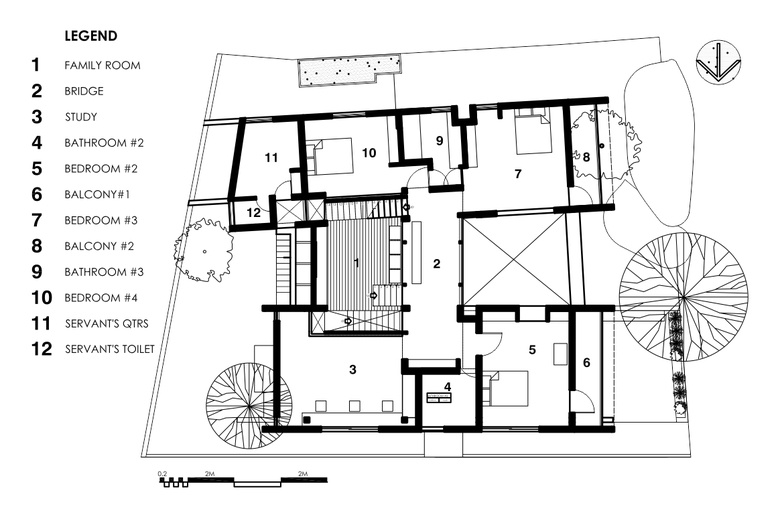 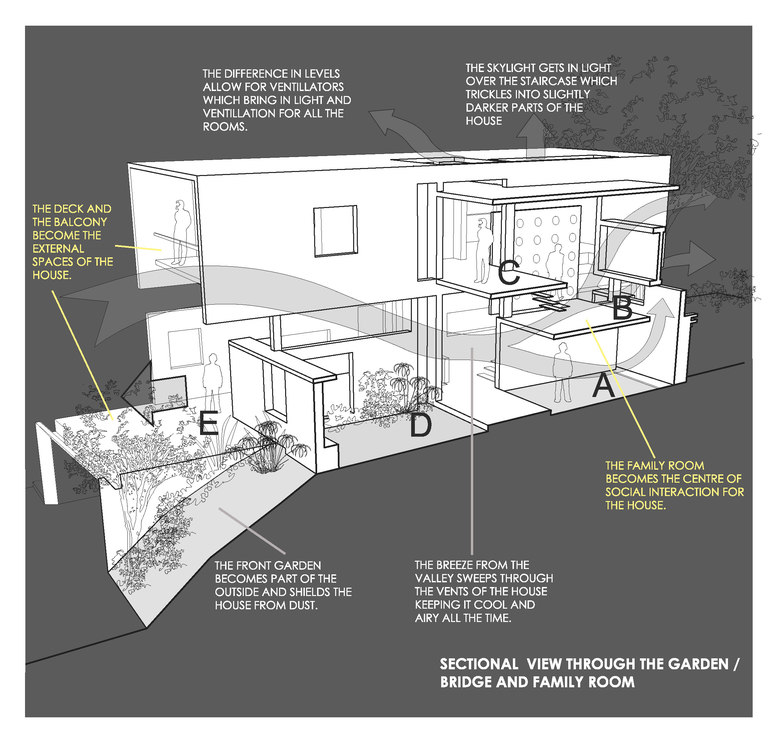 The Ghose Residence sits on the outskirts of a burgeoning Bangalore. It looks over a valley which once was a lake, and will soon become embroiled in construction activity.

The Ghose Residence sits pretty on a rocky hill, with ‘private’ greenery all reveling in the ‘new urban home’; one which opens up to recoil, welcomes to fend off, and builds to sustain. The dichotomy of our escapist urban premise is not lost on it.

THE PREMISE & THE ACTORS:
A typology of insular living, as against traditional Indian joint family models, seeking internal self-sufficiency and peace.

The brick landscape wall wraps, protects, and earmarks the physical module, internalizing the private living spaces. It protects privacy from roads and the heat from the south west. It rises, to ease shoulders, to mark the entry into the individual module. It rises from the earth.

The insular motif of the house and the contextual premise of escapism, elaborates on its linkage with the outside. The upper floors transform into two tubes which reach and breach the brick wall to hover above the valley; in a symbolic gesture. The ends of these tubes are blocked.

The brick landscape wall rises independently to the light frame of the tubes. The continuous glass gap represents their dichotomous symbolic relationship.

The family room hangs in between these tubes, overlooking the internal garden, becoming the heart of the building. A suspension of activity engaging the insular family

in their confines, bringing in light and nature, overlooking every part of the house and delivering it, its purpose of being. It changes with the day, the season into hues and colours making it the throbbing and pulsating part of the house.

The Ghose house discourses on the independent module of living, which is sought by most urban upper class citizens. It elaborates on the divisions, and the lines between perception and reality.

The house has greenery all around, leaving space all around to create a green buffer. It relies completely on natural light and ventilation. It harvests rainwater to try and preserve the ground level water which finds itself in continuous strain.

It models an existential module for the urban family.