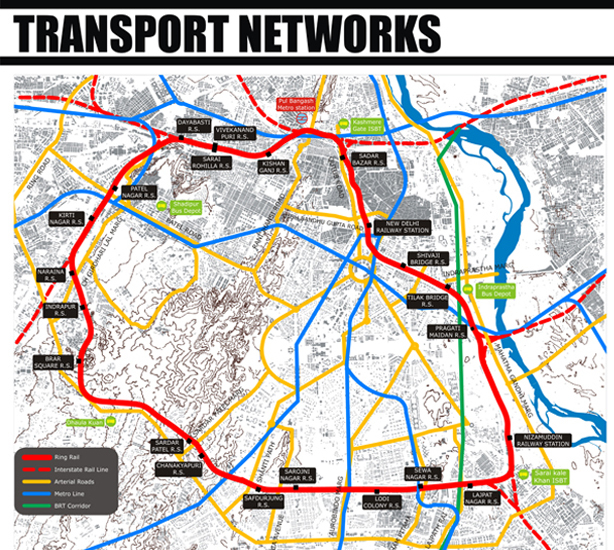 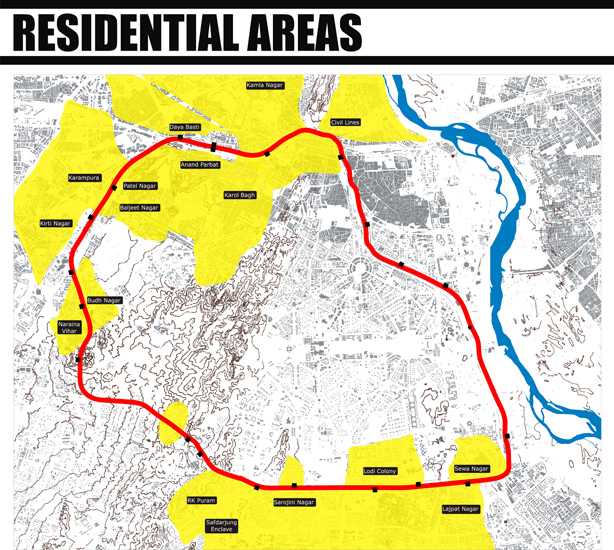 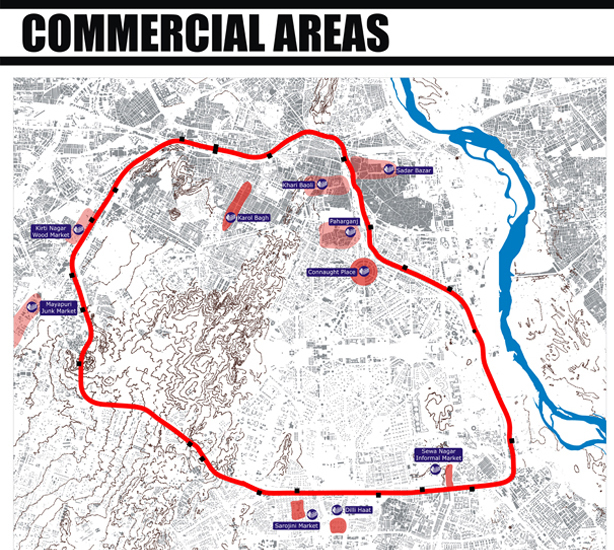 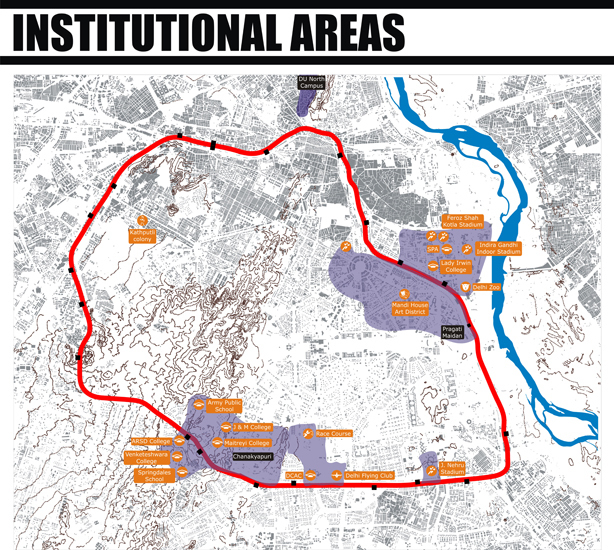 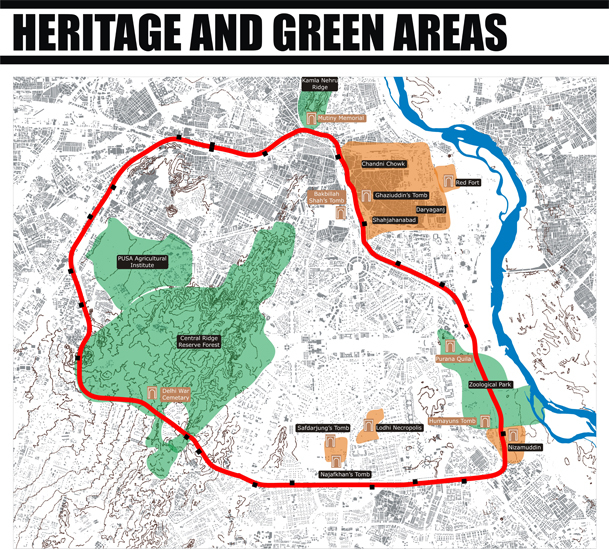 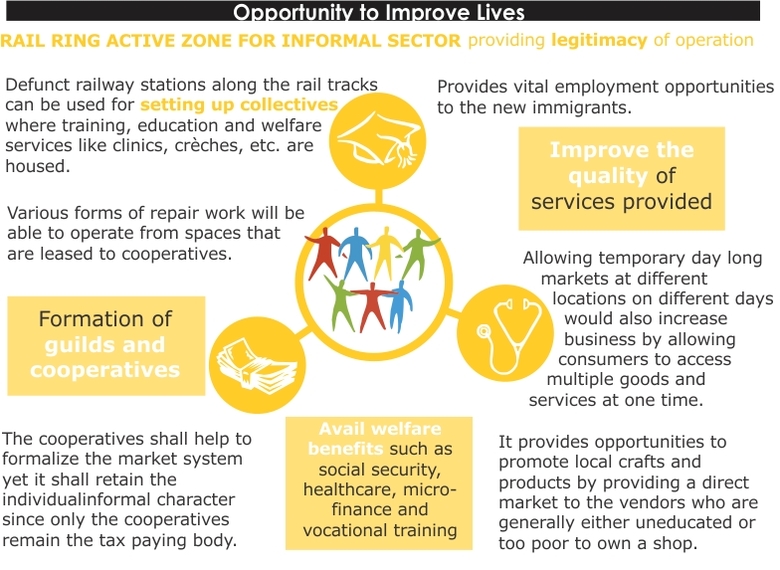 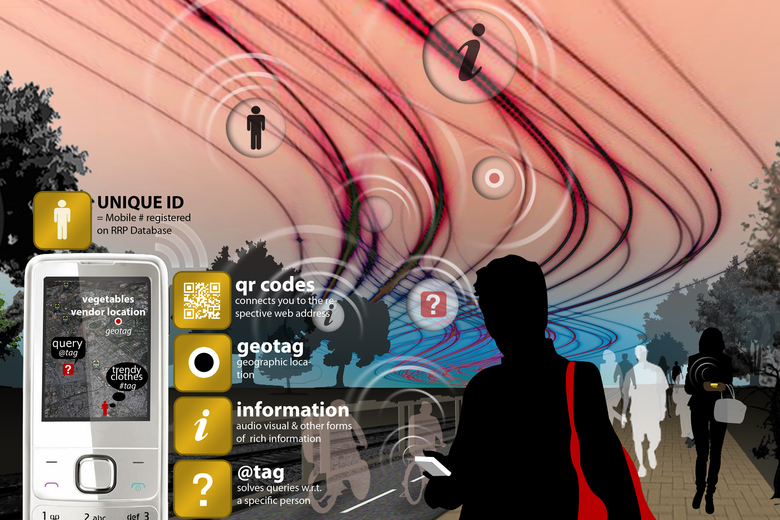 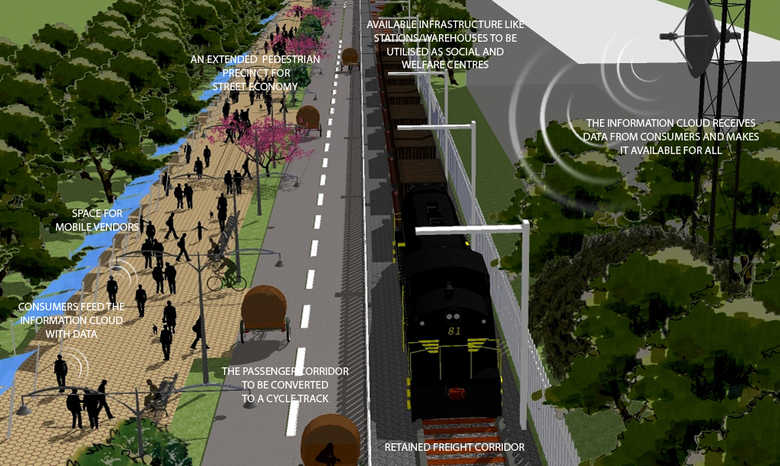 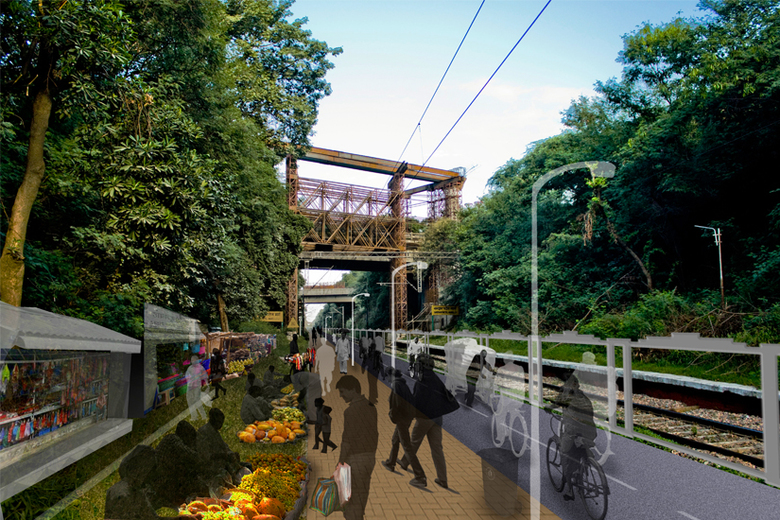 In the mid seventies, work began on laying a single shunting railway line that would circumscribe the extents of New Delhi at that time. Originally called the Delhi Avoiding Line, it was meant to decongest the existing city stations off the interstate goods traffic, to better facilitate the throughput of passenger trains at these stations. Later in 1982, a parallel passenger rail service was initiated to improve the connection of new residential colonies, commercial and industrial areas to the stations as well as to each other. Subsequently, the manner and size in which the city has grown, the non integrated development of other transit systems networks and numerous systemic issues have left this urban transport system grossly underutilized.

The aim of the project is to reclaim the Ring Rail corridor as an urban space that will add value to the urban character of the city while providing a human powered, inter modal transit system that increases connectivity.

The project has been envisaged as an urban context additional to its functional role as a segregated shunting line. This project imagines the Ring beyond the Rail. It puts forth the idea of creating a contiguous belt that is human powered, a precinct that is pedestrian, cycle friendly and abuzz with urban activities that are rapidly losing their legitimate place in an increasingly car centric city. A zone that is not only close to the city's centre but could potentially be close to its heart. The project also seeks to legitimize the informal sector, recognizing its valuable contribution to the city economy and culture It encourages creation of cooperatives in the unorganized sector, which ensures them access to social and welfare infrastructure like health, education and micro finance. These cooperatives ensure them access to social and welfare infrastructure facilities like health, education, etc. Further the rail corridor proves to be an excellent site for establishing an information cloud accessed through basic and most ubiquitous mobile technology (1G) which has witnessed a deep penetration into the city population (across income groups). The cloud empowers peer to peer recommendation, the age old system that drives the informal sector, with cheap new age technology wherein which people can rate, tag and exchange information. The benefits are reaped by all stakeholders by activation of an urban space through slow transit and street economic activities. The project enhances the engagement of the people with the physical environs of the city. The technological model hence developed and the reclamation of the urban space has universal application.

The project was exhibited at The Urban Mobility India conference 2009 and at The Urban Habitat Summit 2009 and has garnered critical acclaim. It was self initiated but now National Association of Street Vendors of India fully supports the project and currently feasibility studies are on with different land owning agencies and stakeholder communities.

The project builds on a simple rail to trail idea wherein a high capacity, underutilized, resource hungry transit system is replaced by a sustainable human powered corridor boosting inter modal connectivity. In addition, the information cloud empowers the hitherto unorganized informal sector and also provides customers usable information on goods and services provided by them. This increases their competitiveness and the quality.

Deeply rooted in social values, the corridor provides democratic & equitable access to urban space and inter modal transit, leveraging the lack of conflict with motorized traffic providing a peaceful, serene and safe zone nestled in the heart of the city. While legitimizing the operation of informal sector by activating a street economy, the project also promotes creation of cooperatives that provides them with access to social and welfare infrastructure.

The underutilized, fossil fuel dependent mode of public transport is replaced by a non motorized mode of transit while making the best use of the infrastructure available on the corridor. Structures like platforms, stations, etc house new functional and utility requirements through adaptive reuse. The corridor passes through the heart of large swathes of urban forest. The scale of intervention and the provision of non-motorized transit require minimal resources or intrusion to the local ecology.

The vocational cooperatives become the rent paying tenants to the land owners, the railways, without formalizing the informal sector, and help them compete more effectively with the formal sector. Rent from cooperatives and information cloud technology service providers generate greater revenues for the land owner (railways). Day long markets would also increase business by allowing consumers to access multiple goods at the same time.

Opening up a completely new urban experience, the project seeks to reclaim a site for street based urbanism that is an integral part of an Indian city, activating a vibrant street culture of performing and public arts that belongs to its citizens. It provides and promotes an urban forest, a calm and serene environment nestled in the heart of Delhi yet hidden from the chaotic city life. Encouraging slow transit, it also enhances an engagement with physical environs of the city and its people.

Other Projects by Anagram Architects