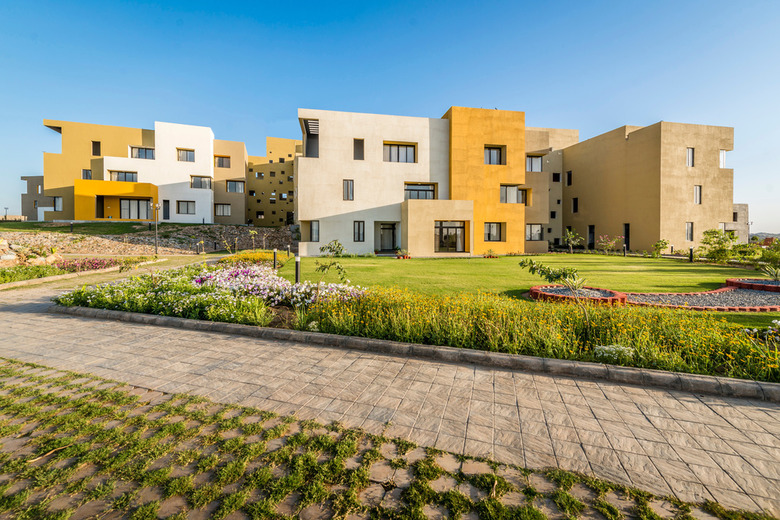 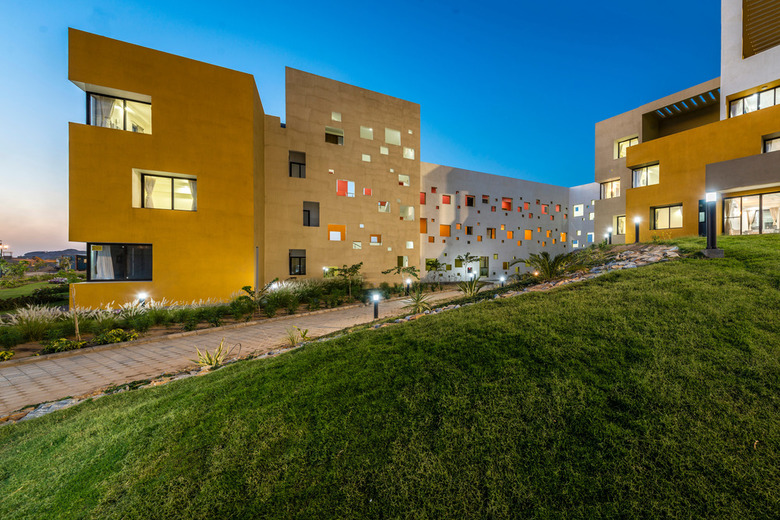 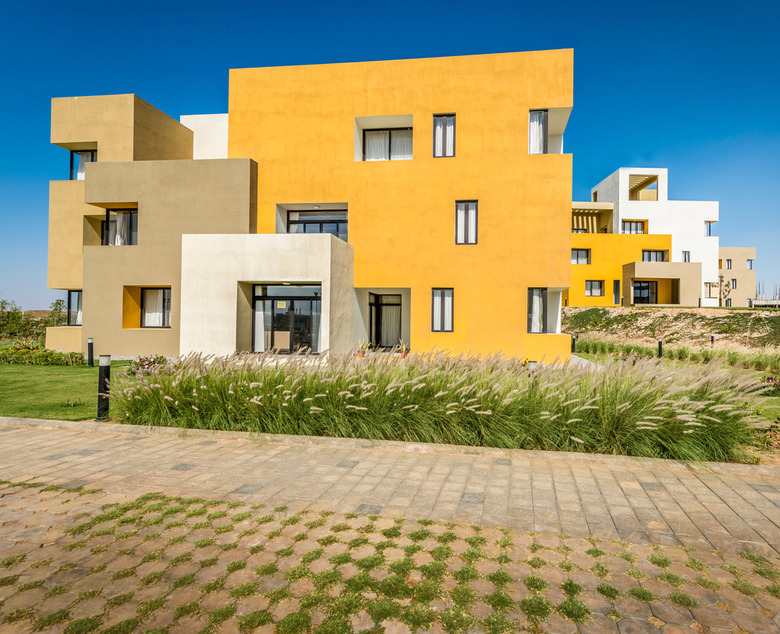 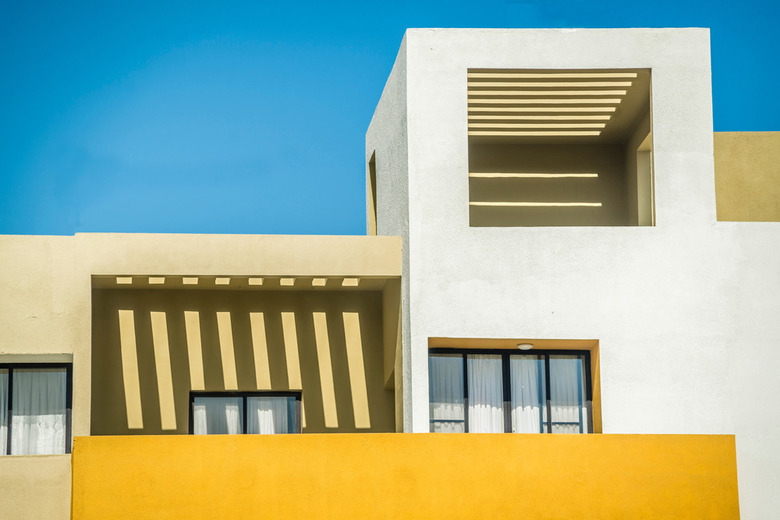 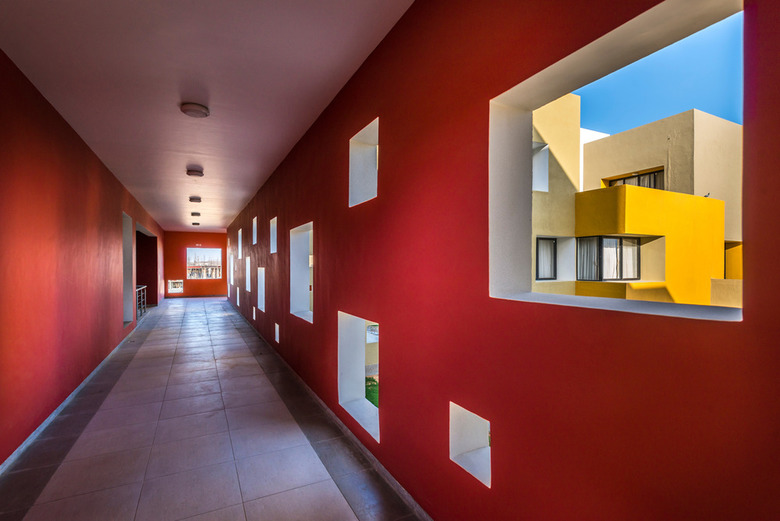 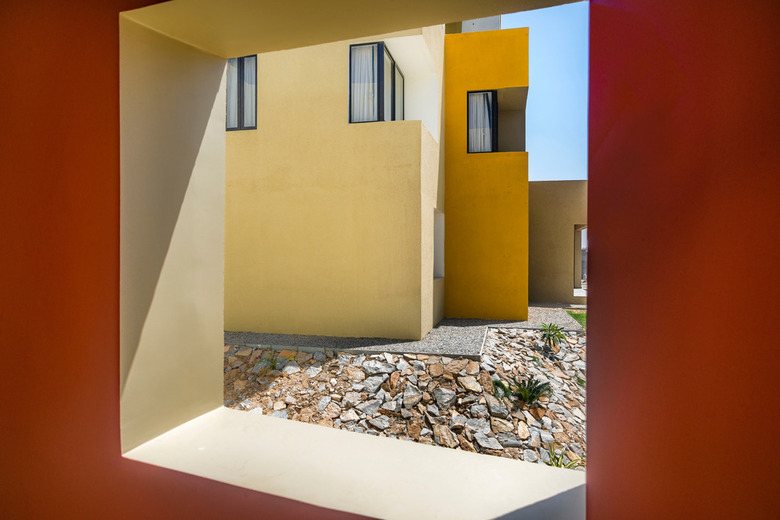 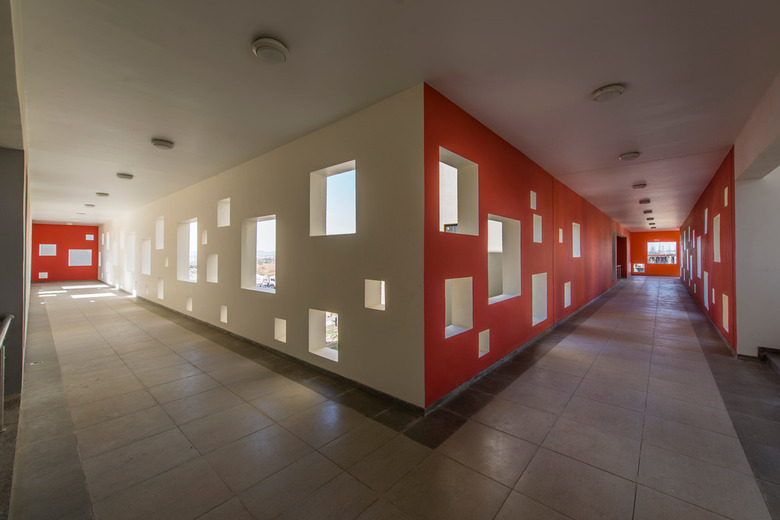 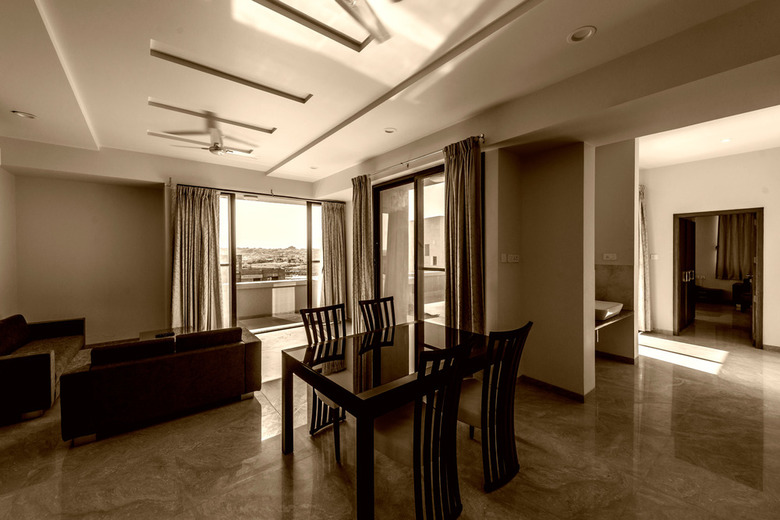 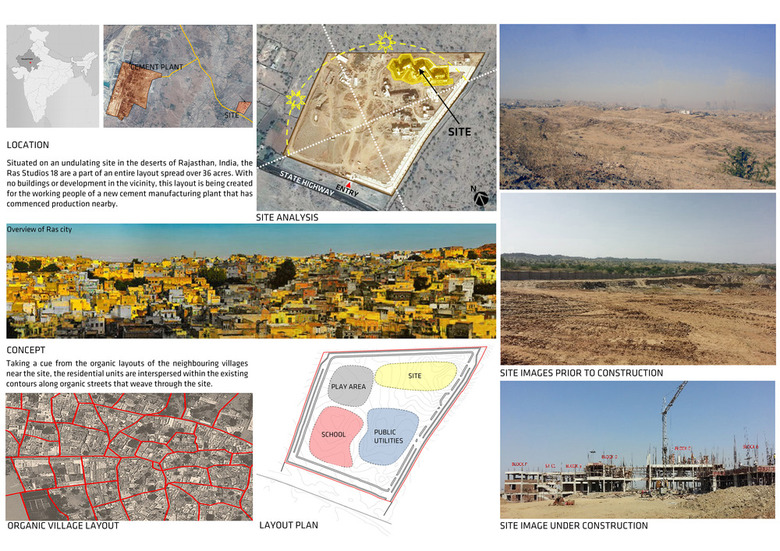 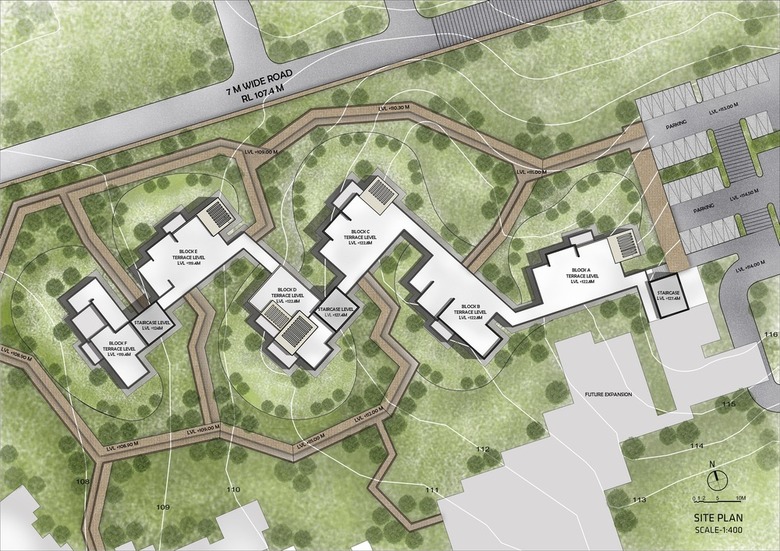 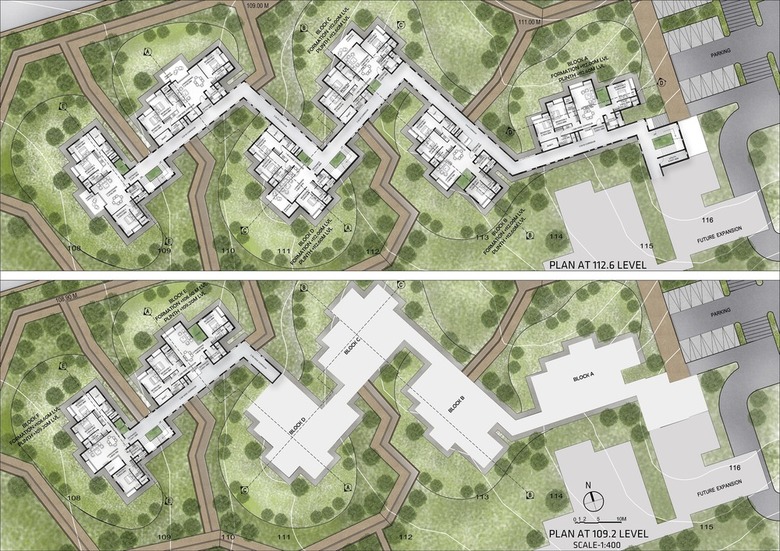 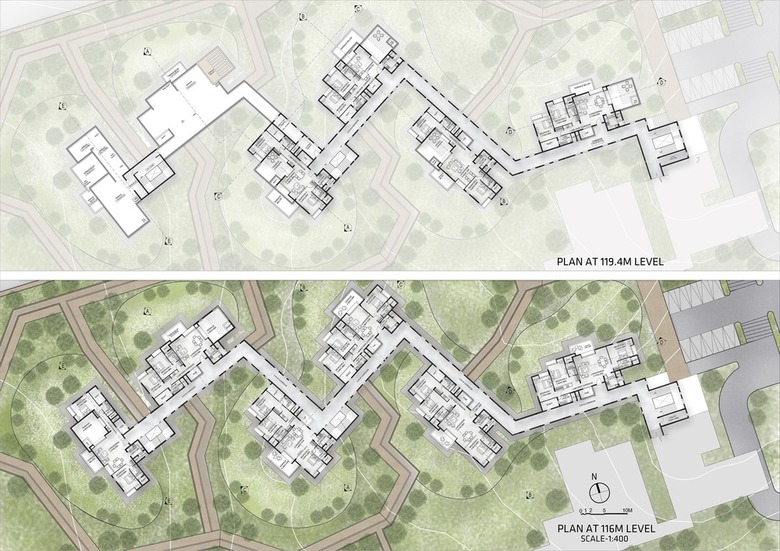 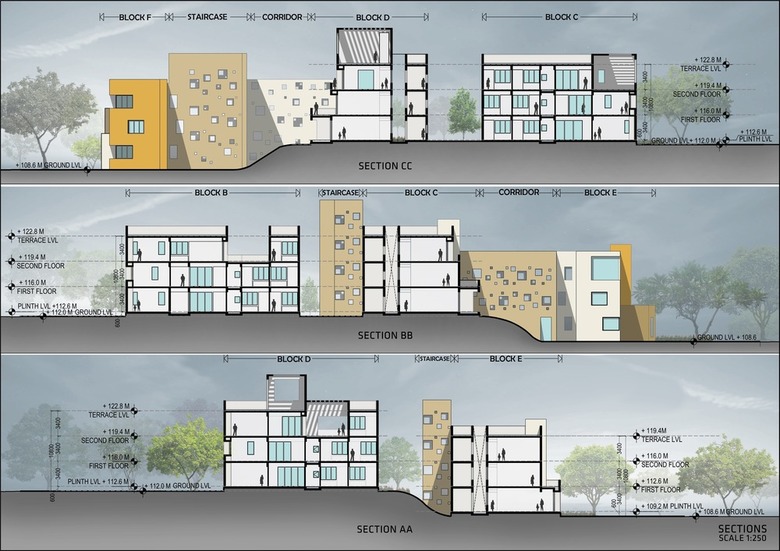 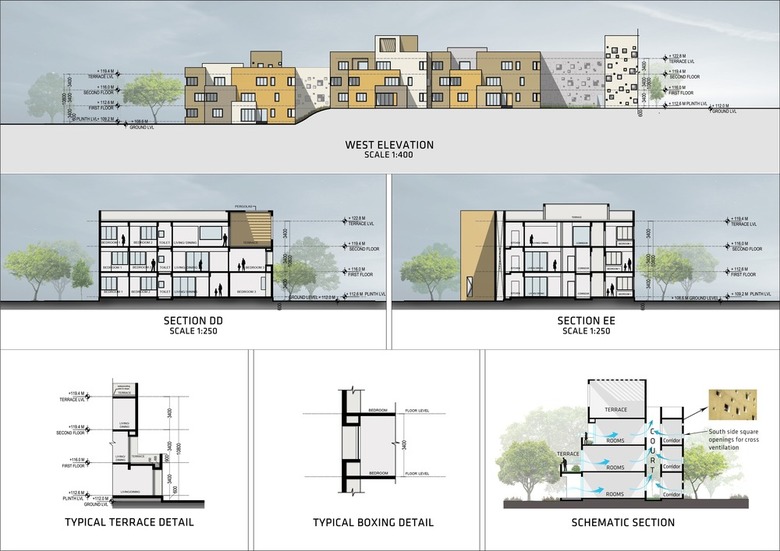 Situated on an undulating site in the deserts of Ras, Rajasthan, India, Studios 18 apartments are a part of an entire layout spread over 36 acres. With no buildings or development in the vicinity, this layout is being created for the working people of a new cement manufacturing plant that has commenced production nearby. Close to the site there is no existing development and there are four villages at a distance of 1 km from the site. Taking a cue from the organic layouts of the neighbouring villages near the site, the residential units are interspersed within the existing contours along organic streets that weave through the site.

The 18 residential apartments follow the organic nature of old Indian cities with houses stepping back and creating interlocked built volumes across three levels. A 4M contour difference is negotiated by the building levels stepping down accordingly. In response to the hot arid climate prevalent in the location of 8 months of summer and temperatures in excess of 35°c, the apartments are all oriented towards the north, north east and northwest with no apartment facing the south. The low rise design allows the residents of studios 18 to be close to the ground level akin to living in individual houses.

The circulation spaces connecting the housing blocks are naturally ventilated with an abstract composition of square punctuations on either side facilitating air to move through. The harsh glare of the sun is cut off; yet allowing natural light within the linear corridors, and creating different patterns at different times of the day. The linear corridors provide a cool ventilated sheltered walkway between the apartments allowing residents to glimpse landscaped spaces on either side while walking through and making the circulation an interesting experience. Each apartment too is cross ventilated with deep recessed windows and open to sky terraces.

Color acts as an integral parameter in differentiating volumes as well as identifying circulation spaces interestingly while alluding to the colors of the region. In Rajasthan colour plays an important role in the lives of the people who wear bright colours daily. As if to compensate for the miles of arid, sandy terrain they see around them, they wear brightly coloured clothes and jewelry. Most cities in Rajasthan state are identified by a colour. Jodhpur in Rajasthan is known as the blue city with traditional homes in hues of blue lime plaster. Jaisalmer is known as the yellow city for its traditional houses being built in yellow sandstone. The colour palette used is the most significant part of its visual impact. The deconstructed cubes sport varied hues of the sandy region, at different times of the day – visually differentiating the stepped, recessed volumes as well as identifying circulation spaces. With lighter hues on external walls to reflect heat off the surfaces, and darker tones indoors to create a cooler feel, they add impact to the highly ‘responsive’ design solution.

Studios 18 is a contextually designed housing project that is sustainable by its design adhering to the existing contours, its orientation to reduce heat gain, its facilitation of natural light and ventilation and its low rise design.