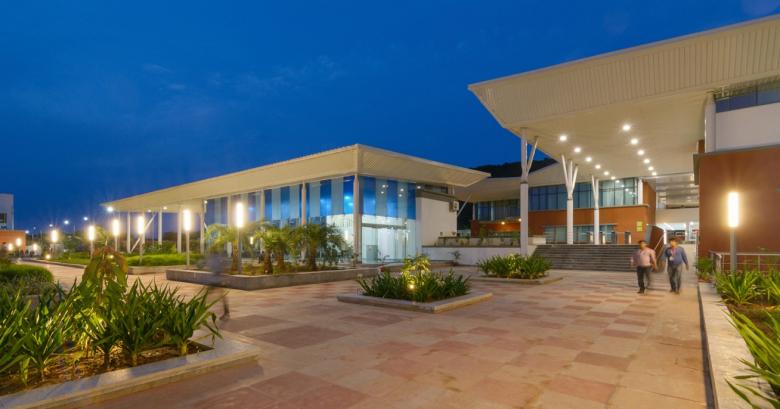 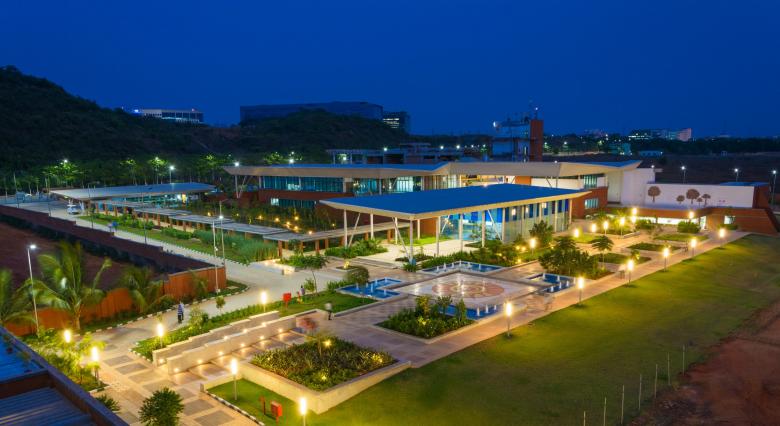 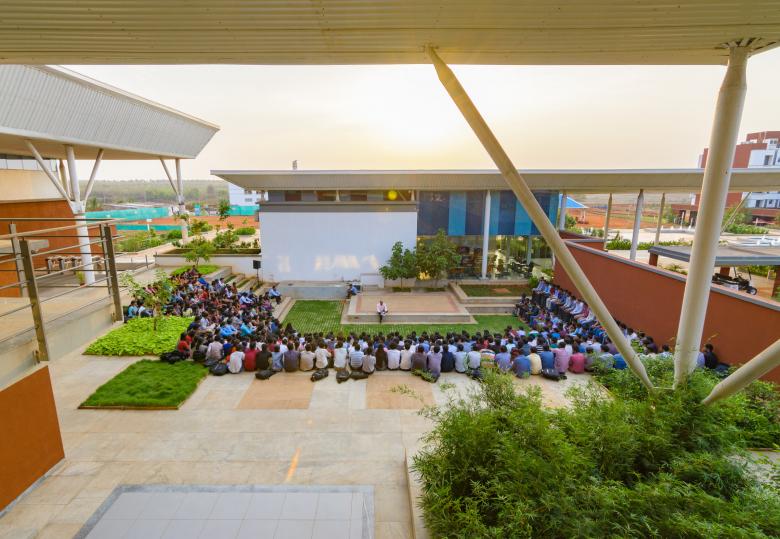 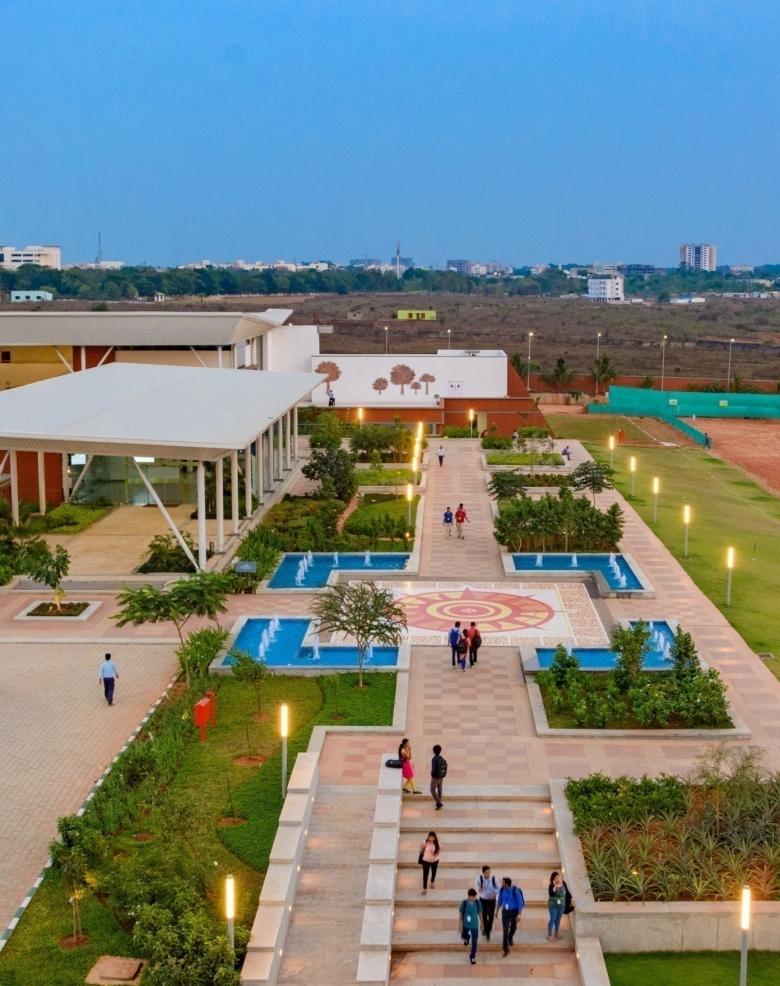 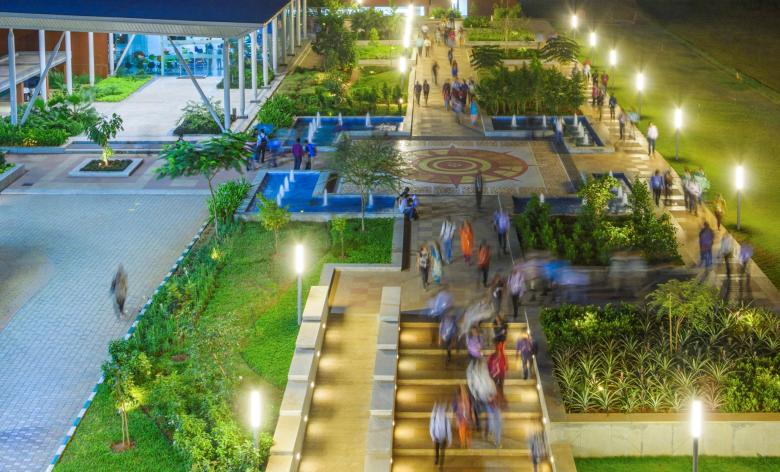 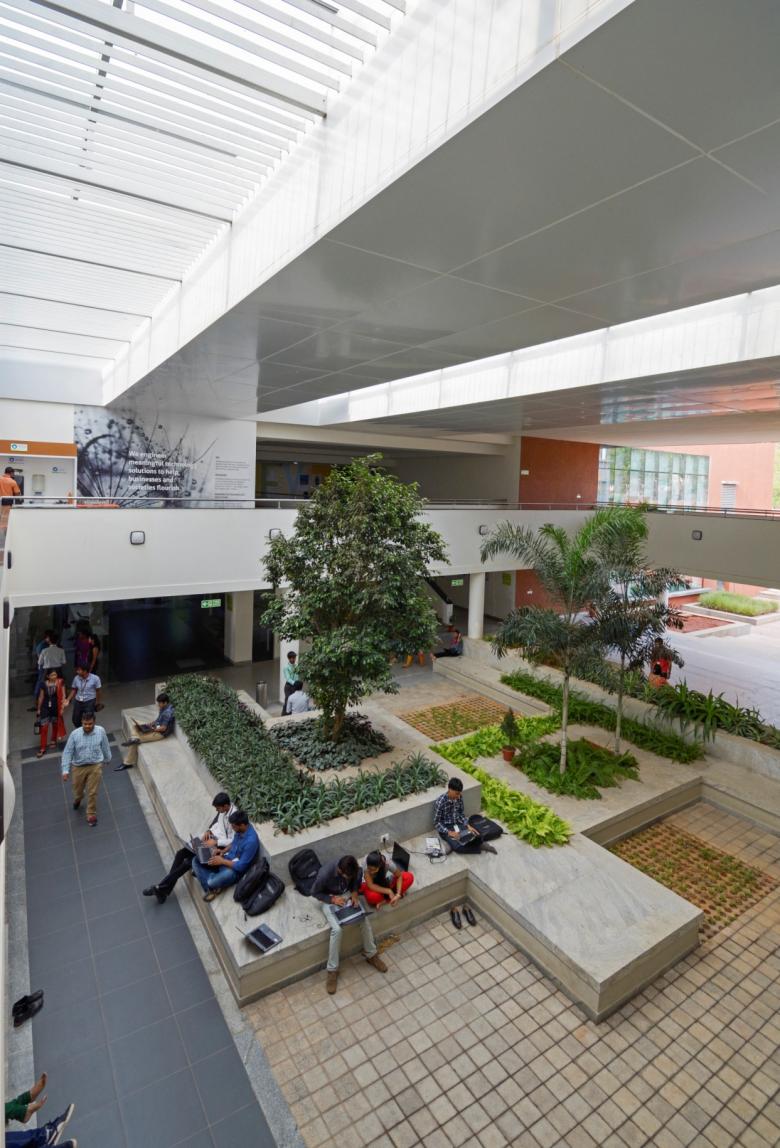 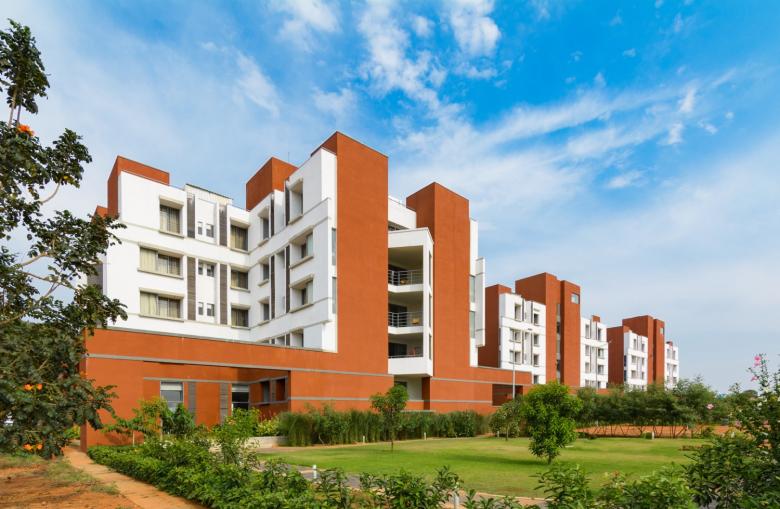 • The Path of Life:
 This sequence runs in the east-west direction, and connects the two major elements of the site’s context: The hill and sunrise to the east, and the reserve forest and sunset to the west.
• The Social Circle:
 This is a pedestrian movement loop from which all the buildings are entered. It interlocks with the Path of Life, as it moves adjacent to the reception pavilion and the water body, and also contains the piazza and park within it.

Each of the built components of the project has been envisaged with a specific theme within the overall concept:
1. Academic Block -The community of learners
This component is modeled on the ancient precedent of Nalanda University, where learning cells are clustered around a central landscape where the learners gather and exchange ideas. Similarly here, the classroom clusters group along a central landscaped spine that forms the heart of the “community of learners”. The spine begins near the lounge pavilion, which is also the point where the pathway from the transit accommodation terminates. From here, one has a choice of two paths. One can enter the main spine of the learning Centre, which moves past a central courtyard to terminate at a garden from which one has view of the hill. Or one can take the steps down to a cafeteria plaza. Each classroom cluster also has an outdoor spill out, either on to a verandah on the external face, with the ground floor classrooms also having secured garden spaces on the internal face.
2. Transit Accommodation -The convivial society
Five transit accommodation blocks are connected by a central spine .At each floor of the block are four clusters of rooms around the central atrium. Each cluster has 4 twin sharing rooms with a living/collaborative space. The transit accommodation is arranged along a social and cultural spine, which runs from the main reception and terminates at recreational hub (which has facilities like music room, gym, indoor games etc.). This spine links amenities such as courtyards, retail kiosks, cafés, libraries and recreation facilities. This mix of activities at the ground plane ensures that the spaces along the spine remain in constant use and create lively public spaces.

• 1 Acre pond.
Even before the start of construction of building we created a pond at the lowest point of the site spread over an acre of land. Surface drainage of the site is diverted to the lake and passes through siltation tanks before getting in to the lake. By this we could avoid silt entering into the lake. Water from the pond was used for the construction purpose during the construction & now it is used for domestic purpose. Roof rainwater is directly stored in underground Tanks and used for domestic purpose during rainy months (June –November) while lake water is used water during non-rainy months (Dec- February). Campus is self-sustainable in water at least for 9 month of the year.
• 1 Million magic brick
When we tested the earth excavated from site (from lake and footing excavation) we realized, soil was so good that we could make compressed earth block out of it by just adding 5% of cement. Strength attained by the block after 28 days of curing was twice the strength of a brick or concrete block. Manually production of such a large quantity was just impossible. After a lot of research we realized we could use fly ash brick making machine itself for making soil blocks also. All the masonry walls including some of the retaining walls are constructed using this block.
• Passive cooling in Transit Accommodation
Passive cooling system is designed to deal with hot and humid climate of Bhubaneswar. There are vertical duct running from roof to ground floor through each of the rooms. Cold and de-humidified air is pushed through this duct from the roof into rooms. Air is cooled through simple cooling process like cooler. Further the air get exhausted into living room and than into atrium. At the top of atrium we have an exhaust chimney, which get heated with sunlight, and pulls the relatively cold air.
• Native landscape
Campus landscape is enriched with native plants selected after extensive research by our landscape architect. We created a dedicated mini forest of Sal trees along the promenade between the reception and lounge pavilion. A lot of medicinal and fruit bearing trees are also planted to make the landscape more useful.

A Sustainable campus designed and built, not just to provide physical infrastructure but also to provide an emotional infrastructure. We are thankful to all who were involved with project, from client to masons who made this possible.