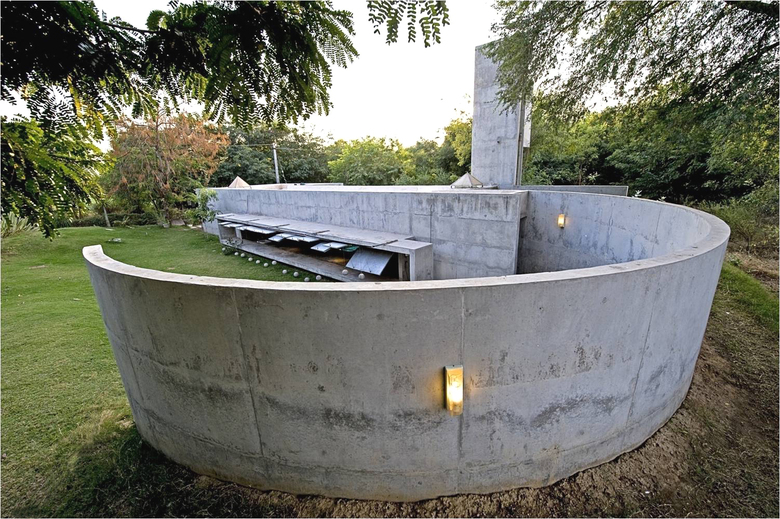 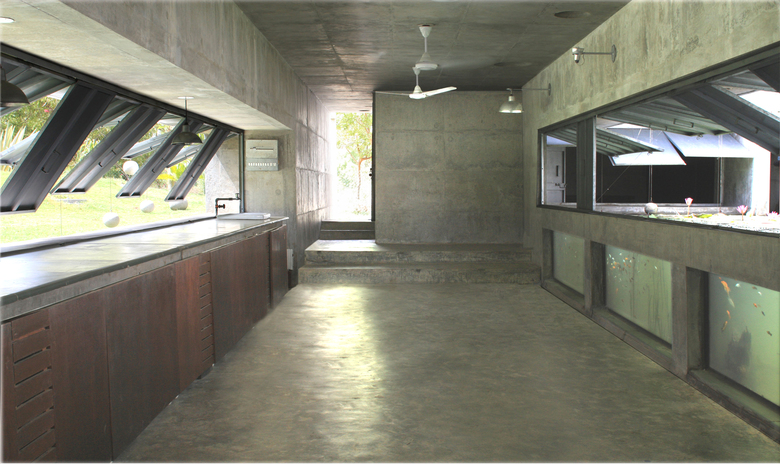 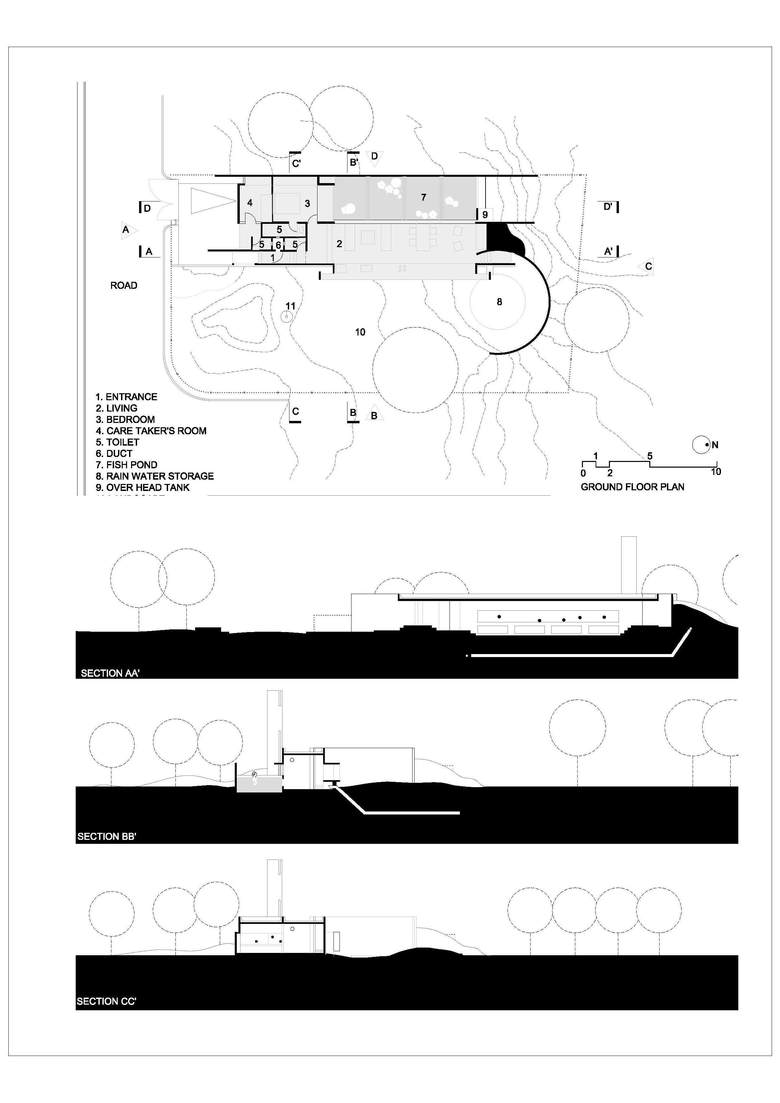 Scooped out of a plot of farmland twenty minutes outside Ahmedabad city, this house has been built for an aquarium shop owner to function as a place to breed fish as well as to serve as a weekend retreat. Its design is centred around four fish breeding tanks and an observation room which could double up as a living room. Every aspect of this design is set out to strip expense from the project; be it using 125mm thin concrete walls with standard concrete, one duct space for its three bathrooms, doors and windows made by pressing GI sheets or using bent rods to function as a handle and locking aldrop. On approaching the entry from the country lane one finds the entrance nondescript and hidden in the scrub. The mandatory margin required is used for the tank space – while the walls of the plot and house are used as a retention structure for the tanks. These tanks are enclosed by glass windows which runs the entire length of the living space, the added bonus being that the glass works out cheaper than a concrete wall, more so for aquarium manufacturers!

On entering the house one steps up into a corridor opening to a small powder room on the left, followed by a choice to either take the left into the bedroom, or to carry on down directly into the long living space. The layout of the house is such that several differing views of the water bodies are provided; in the bedroom space, the sitting ledge is just above the water level and looks down the long length of the pools; while the living space affords the inhabitant an uninterrupted view over the tanks when the windows are open, and view of the fish through below-the-sill glass windows. Resting half-sunken under the ground level, negating the need for foundations, the long concrete-box house splits the plot space into two distinct yet continuously mingling spaces; it opens on one side to the garden and to the four nine thousand litre fish breeding tanks on the other. The living area can be opened to either of these two spaces by top hung metal shutters which extend at eye level through the entire length of the walls. When closed it is a 13m long and 3.6m wide space rendered by the light through the fish tanks. On opening the shutters this linear space transforms completely into an infinite one perpendicular to its original direction. The metal shutters are held by handmade concrete baubles, the cheapest counterweights possible; they either swing in the wind when windows are partially open or dip out of view into the lily padded pools when the windows are fully open making the house animated in use or even without.

The concrete frame around the window plays multiple roles; as a seat from the garden side, steps for children to climb on from the garden or jump to from the terrace, a weather protection device while also providing a rat & snake proof section. It starts serving as a bar counter with the attached kitchen platform for larger gatherings. The grassy knoll that rises in front of the long opening bears under it a bio-gas plant, fifty thousand litres of rain water storage, and an earth heat exchange tube. Back through the shrubbery and fields the house assumes a squat position; the curving wall to one side allows one to walk up a gentle slope on to the terrace running over the length of the house. The weekenders enjoy the feeling of floating over a bed of lily petals while being weighed down by the baubles.